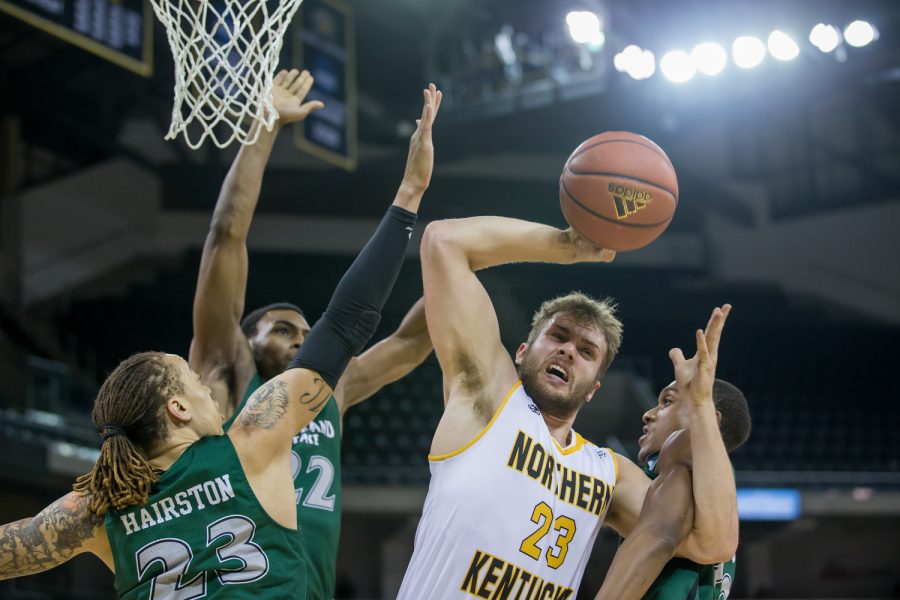 Carson Williams (23) fights to shoot under pressure in the game against Cleveland State.

The NKU men’s basketball team defeated Green Bay 77-65 in Green Bay Saturday afternoon. The Norse improve to 14-6 and 7-1 in Horizon League play while the Phoenix fall to 8-15 and 3-7 in conference play.

Four Norse finished in double figure scoring, including Lavone Holland II, who scored 16 points and dished out four assists and Drew McDonald, who finished with 15 points and five rebounds.

Green Bay shot 43.4 percent on the day while the Norse shot 45.3 percent, including 53.3 percent in the first half. Green Bay outrebounded the Norse 35-34 but the Norse grabbed 10 offensive rebounds opposed to seven from the Phoenix.

NKU led by as many as 15 in the first half after a three by Jalen Tate with 13:37 remaining. The Phoenix would rally to cut the deficit to nine points, and the Norse would take a 40-31 lead into halftime.

The Norse stumbled in the second half, shooting just 38 percent in the half and allowing the Phoenix to shoot 42 percent. NKU forced 19 turnovers throughout the game, which allowed the Norse to maintain their lead.

NKU will return to BB&T Arena on Friday Jan. 26 to face Oakland for the second time this season. The Norse defeated the Grizzlies in Oakland nearly three weeks ago. The game will be available on ESPNU. Tip-off is scheduled for 9 p.m..