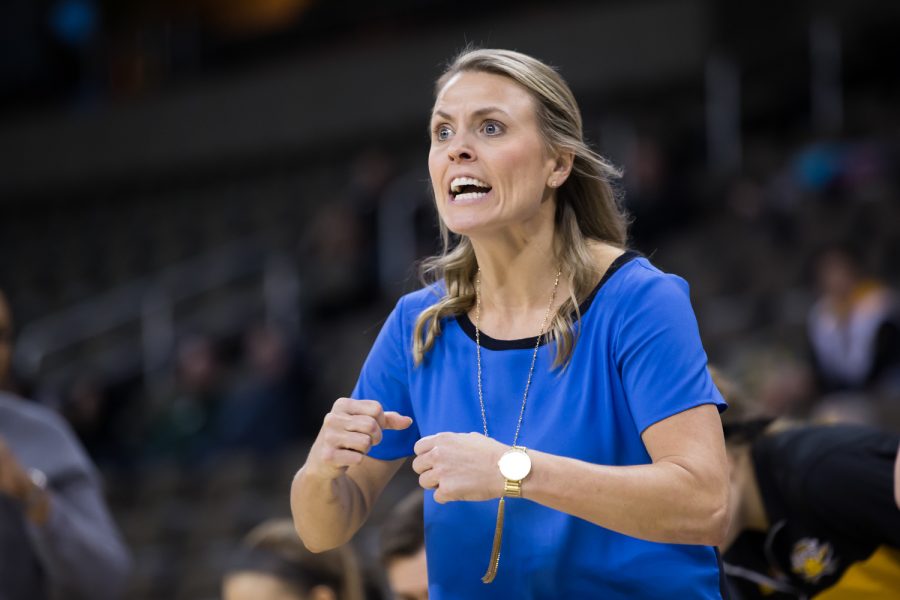 Head Coach Camryn Whitaker talks to her team during the game against Green Bay.

A series of back and forth possessions between the NKU women’s basketball team (4-12, 2-3 Horizon) and Wright State University(13-4, 4-1 Horizon) in the final minutes of the game, resulted in overtime play and a Horizon League loss for the Norse on Saturday afternoon, 68-63.

“I’m really proud of our team’s effort,” said head coach Camryn Whitaker. “They’re the second best team in the league and we took them to overtime.”

The Norse got off to a slow offensive start before elevating their scoring in the second half. The team shot 40 percent from the field in the first two quarters but improved their accuracy to 48 percent in the final quarters, including overtime.

“We were struggling to get the ball inside,” said Whitaker. “We switched our offense up a little bit and it allowed our kids to play freer and not think so much.”

“Taryn stepped in and ran the point guard spot the whole second half,” said Whitaker. “She’s never practiced that a day in practice but her team needed her to step up today and she did.”

After chipping away at a nine point early deficit in the first quarter, the Norse battled back and cut the lead down to three by outscoring Wright State 9-8 in the second quarter. However, the Raiders ended the quarter on a 4-2 run and went into halftime with a 28-23 advantage.

The Norse held a 54-53 lead in the last minute of regulation. The Raiders attempt to take the lead with a 3-pointer failed to work, resulting in a Norse possession that could potentially seal the victory. However, a costly turnover and foul by the home team allowed guard Chelsea Welch to put up three points for the Raiders to take the lead, 56-54 with 21 seconds remaining. Never to be deterred and with ice in her veins, Samari Mowbray hit a clutch layup in the paint to force overtime.

The young Norse continued to improve on the field and went 7-of-11 (63.6%) while holding the Raiders to 4-of-19 (21.1%) of shooting in the fourth. The quarter also featured 6 ties and 6 lead changes before heading into overtime.

“Their [Wright State] man to man offense is excellent,” said Whitaker. “Defensively we switched and stayed with our zone and thought it had affected them in the second half.”

Wright State scored the first four points in overtime and led, 60-56 with 3:51 remaining. A pair of free-throws by Glick would shrink the lead down to two, but that would be as close as the Norse would get for the remainder of the period. The Raiders went to work and outscored the Norse 12-7 to seal the overtime victory, 68-63.

“I’m so proud of our team and the way they fought,” said Whitaker. “We have never been in an overtime game and we are learning so much every single game.”

“Chelsea Welch is an unbelievable player and Lexi Smith does what she does in rebounding,” said Whitaker. “No matter what you do in practice, there is no way to prepare for that.

“It’s a process,” said Coffey. “With every game, we continue to gain experience that will help prepare us for the next game and any future games moving forward.”