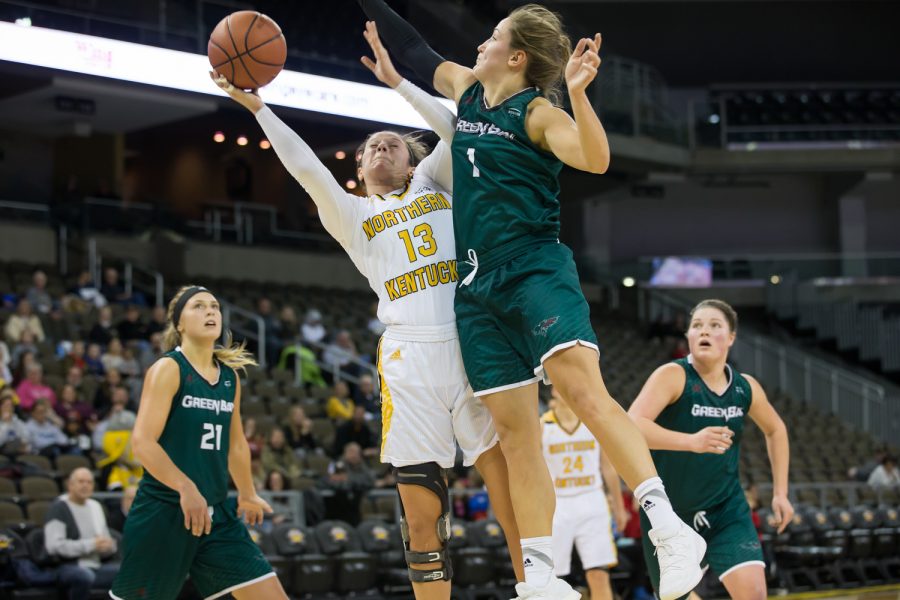 Jazmyne Geist (13) shoots in the game against Green Bay.

Taugher and Molly Glick helped the Norse build an 18-9 lead with 3:05 left in the first quarter, but Detroit Mercy closed the quarter on a 7-0 run, with a pair of three’s from Nicole Urbanick and Lexey Tobel. With two seconds left on the clock, Tobel’s first quarter buzzer beater brought the Titans within two, 18-16.

The lead changed five times in the second quarter after a layup by Aja Marinkovic to give the Titans the edge, 25-24, with 5:51 left to go in the quarter. However, the Norse would go on an 18-6 run while shooting 75 percent on nine of 12 from the field behind Coffey and Grace White to close the quarter and take a halftime lead, 44-31.

Despite three third-quarter threes from Marinkovic, NKU extended their lead to as many as 25 points (61-36) and ended the third quarter ahead, 65-47. The Titans would chip away at the lead in the fourth and use a 5-0 run to pull within 12, 69-57, with 7:32 left. Despite a 14 point explosion and four threes from Marinkovic, NKU would hold the Titans off and cruise to victory.

Taugher led the Norse with 19 points and Coffey added a career high 17 points and six rebounds to help the Norse win for the third time in the past four games.

Glick and Jazmyne Geist also chipped in double figures with 11 and 10 points respectively to help the Norse shoot 46 percent of its shots from the field. Geist tied Grayson Rose for the team lead in rebounds with a career-best seven rebounds.

The Titans were led by Marinkovic, who finished the game with a season-high 23 points, the eighth time in her career reaching 20 or more points. Seniors Brianne Cohen and Nicole Urbanick also scored double figures, 11 and 10 points.

The Norse will continue their road trip and remain in the Detroit metro area as they take on Horizon league foe, Oakland University (8-6, 1-2 Horizon) on Saturday, Jan. 6th. Tipoff is scheduled for 3 p.m. and will be broadcasted on ESPN 3.