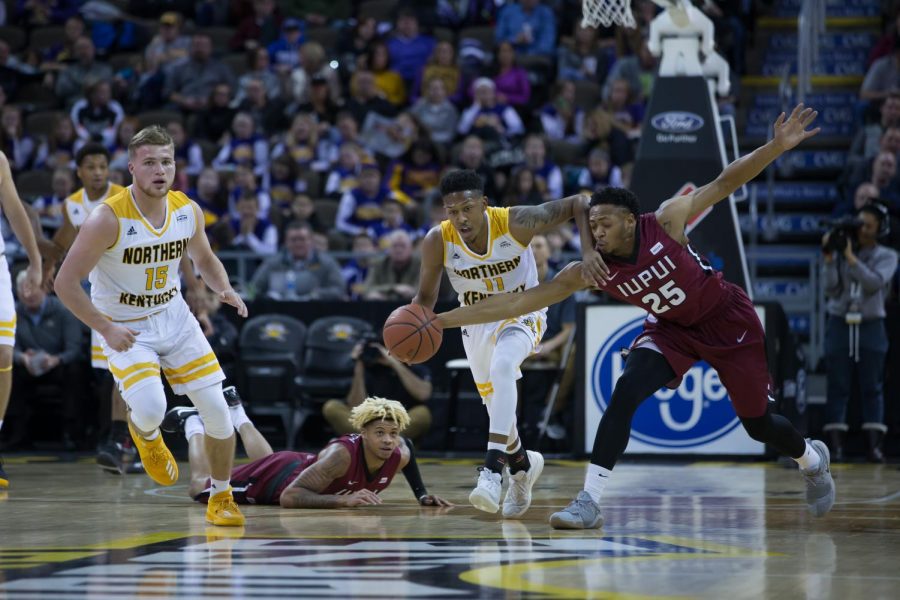 Mason Faulkner (11) steals the ball in the game against IUPUI.

The Norse improve to 8-5 and get their first Horizon League win of the season while the Jaguars fall to 3-9 and are 0-1 in conference play.

“We challenged our young men this week on their ability to guard ball screens and rebound, defensive rebound,” head coach John Brannen said. “We were able to get some separation in the second half. We got a tremendous lift from our bench.”

After the losses to Texas A&M and UMBC, the Christmas break allowed the Norse to refocus before the start of Horizon League play.

“For me, the break came at a perfect time,” guard Lavone Holland said. “It gave me a chance to get back to the basics and just focus on getting better as a player.”

Tonight was the first game for IUPUI in conference play, making it feel more like a non-conference game for the Norse, according to junior center Drew McDonald.

“We didn’t know much about them,” McDonald said. “They came out and played really hard. We knew they would play hard, be physical.”

The Norse started the game slow and were down 21-14 with just over seven minutes remaining in the first half. NKU then went on a 19-0 run to take the lead and end the first half.

“They came out and hit us,” McDonald said. “We picked up our intensity as a team. As a leader I just figured I needed to be the hardest playing man on the floor.”

“Lavone did a great job just running our team,” McDonald said. “I just focused on the defensive glass. I’ve been focusing on rebounding and then letting everything else come to me.”

While he was just 2-10 from the field and 0-4 from three, Holland finished with eight assists and did not commit a turnover. He also grabbed two steals and grabbed seven rebounds.

“Not concerned at all with 2-10, 0-4 especially when you have eight assist out there,” Brannen said. “I can’t put into words how valuable he is to our program in a multitude of ways.”

Holland was a power forward before he came to NKU, according to Brannen, and he is still developing into his role as a point guard.

Holland is also 21 points away from reaching 1,000 career points for his career.

“Man, it’s like the rim is getting smaller and smaller on me,” Holland said. “I’m just trying not to think about it and play for my teammates.”

Jalen Tate added eight points on 4-6 shooting while Carson Williams added 11 points. Nine different players scored for the Norse, including Dantez Walton who scored seven points and ignited the Norse rally in the first half.

D.J. McCall was the lone Jaguar in double figures with 11 points while Evan Hall and Ron Patterson both finished with nine points.

The Norse will play UIC on Saturday at 7 p.m. at BB&T Arena before hitting the road to face Oakland. Saturday’s game will be available on ESPN3.