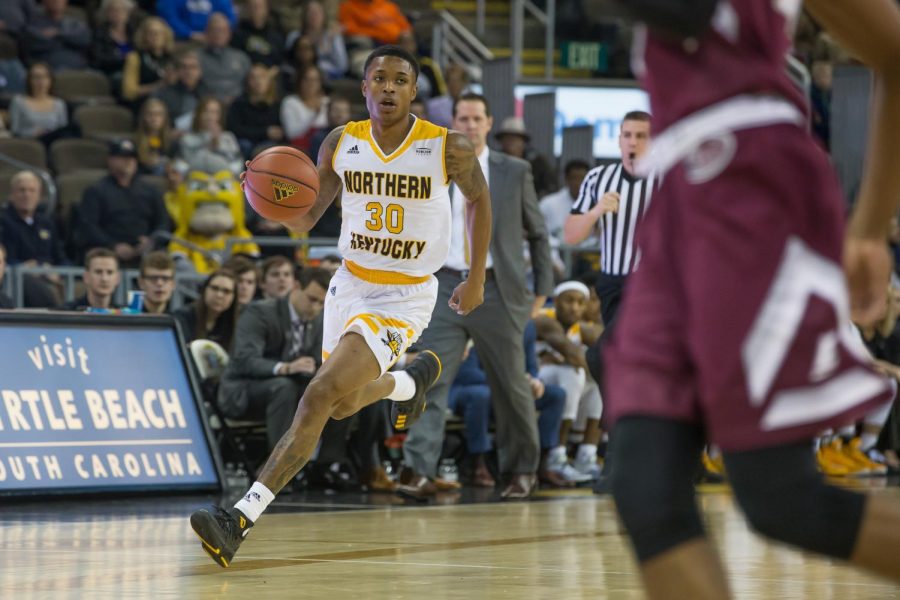 The Norse took down in-state rival Eastern Kentucky 91-63 Sunday night at BB&T Arena, improving to 7-3 on the season. This was the first matchup between the two teams since the 1992-93 season. Three Norse players scored in double figures: Drew McDonald (23), Carson Williams (21) and Dantez Walton (10).

“It was great to come back and get a win. Coach emphasized all week that we need to have the edge tonight and we did just that,” Walton said.

NKU head coach John Brannen said his team’s focus tonight was that on their identity and playing to it. Having their identity makes them the team that they are he said.

“Our focus was energy, effort and playing to our identity. That is all we talked about doing all week,” Brannen said. “I’m really proud of our guys and how locked in we were.”

In the first half the Norse controlled the early part with a seven-point run to open the game up. McDonald puts up the NKU’s first field goal after starting the game with four-straight free throws. The Colonels answered by going on a six-point run and eventually taking the lead at 18-15.

Three-point shooting was not a strong point in the first half for NKU as they only converted one of their 13 shots taken from beyond the arc. EKU shot 40 percent from both beyond and inside the arc.

Towards the end of the first half, the Norse started to pull away. Dantez Walton added six of his eight points in the final three minutes to give the Norse their largest lead of the half at 37-29.

“I told our guys at halftime that we are top 20 in the country in field goal percentage…let’s play inside a bit more,” Brannen said.

The Norse pulled away quickly in the second half of play to secure their win. Shooting five for seven to open the second half, the Norse found themselves up 17 with 16:39 to play.

Williams opened the second half with four-straight points including a steal and a dunk to give the Norse their first double-digit lead of the night. He added 14 of his 21 points in the second half.

The Norse had the hot hand shooting the ball, shooting 25 of 35 in the second half and hitting 60 percent of their shots. They also scored 64 points in the paint, their biggest amount down low all season.

“It’s part of our offense. We did a lot of reads and our guards did a good job feeding the ball down low,” McDonald said. “They never made any adjustments so we kept doing it.”

The Norse will hit the road for the final two non-conference games, the first at UMBC on Sunday Dec. 17th at noon and then travel to College Station, Texas to take on nationally ranked Texas A&M Tuesday Dec. 19th at 8 p.m..