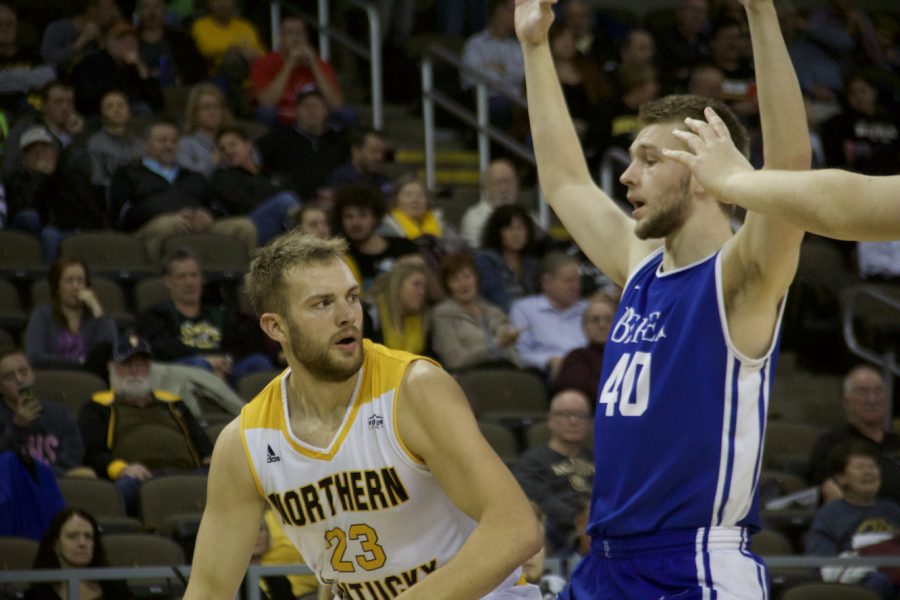 After two straight road losses, the win brings the Norse to 5-2 on the season. The loss drops Berea to 3-1 on the year.

“Obviously, coming off the last two losses, our focus was all in our energy level and our toughness,” head coach John Brannen said. “I didn’t feel like we played forty minutes of tough basketball that this program had become known for (in the two losses).”

The Norse started the game on a 24-0 run before a Jair Jackson dunk put the Mountaineers on the board.

At halftime, ten Norse had scored a basket, and NKU led 53-19. Carson Williams led the Norse with eight points. Williams and Drew McDonald had four rebounds each. The Norse outrebounded Berea 28-14 and went to the free throw line nine more times in the first half.

Williams led the Norse on the night with 18 points and five rebounds. Jeff Garrett added eight rebounds for NKU. By the end of the game, 11 Norse scored a basket, and 13 played in the game overall.

NKU shot 56 percent from the field compared to Berea’s 23.5 percent. The Norse went to the free throw line 26 times, and converted on 21 of those attempts. Berea went to the line just nine times, scoring six.

“Obviously a lot of positives, more so than just proud and excited about winning the game, but back to winning again after two really tough losses,” Brannen said. “Hopefully it will prepare us leading into the weekend.”