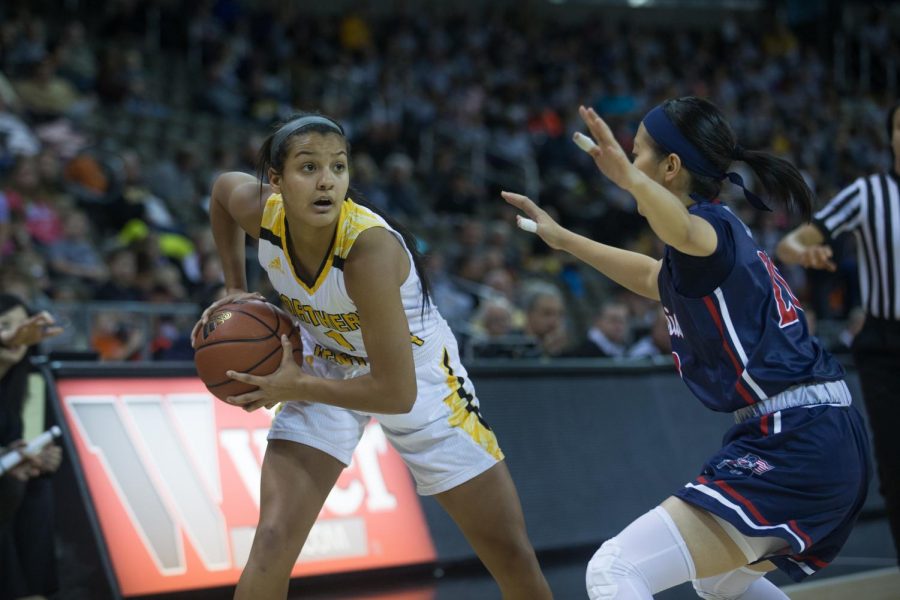 Grace White (1) looks for a teammate to pass to in the game against Robert Morris.

The NKU women’s basketball team lost to Robert Morris 59-50 on Tuesday afternoon. The Norse fall to 0-4 on the season while Robert Morris earns their first win of the season.

“Credit to Robert Morris. They’ve won their league two years in a row,” NKU head coach Camryn Whitaker said. “There is no one easy on our schedule and with this young team we are getting thrown in the fire early.”

“We got off to a bad start,” Whitaker said. “Our sense of urgency and our defensive intensity wasn’t there. We have to do the little things that we typically do like boxing out and out rebounding our opponents. You do a good job of stopping them and making them miss the first shot and then you don’t turn and box out that’s so deflating.”

Despite the first quarter woes, Whitaker said was pleased with the way her team responded. Through the final three quarters, NKU outscored Robert Morris by a point.

The Norse grabbed 40 rebounds, including 19 offensive rebounds, while Robert Morris snagged 31 and ended the game with just nine offensive boards.

The Norse also limited their turnovers, giving the ball up just 17 times.

The Norse finished the night shooting 26 percent from the field and ended the game 1-17 from three. Robert Morris shot 43 percent on the night and 3-12 from downtown.

“You aren’t going to win many games when you shoot 26 percent,” Whitaker said.

NKU shot 38 free throws in this game but only made 25 while Robert Morris shot just seven foul shots before the four minute mark in the fourth quarter.

In this game and through her first four games as a Norse, Rose has realized the importance the little details of basketball.

“We need to put everything together,” Rose said. “The little things matter in the end and you don’t really realize that until the game is over. The game is so much different at this level and little things are so important. Once we get that all together it’s going to be good.”

Robert Morris had 22 points in the paint in the first half and collected six offensive rebounds. The Colonials ended the night with 36 points in the paint. Nneka Ezeigbo scored 16 points and was an efficient 8-13 from the field while forward Megan Smith scored eight points and center Mikalah Mulrain contributed five.

“In the first half we weren’t defending the way we defend,” Whitaker said. “They were burying us and we were just allowing it to happen.”

Both teams combined for 15 turnovers in the third quarter. NKU cut the lead to seven, but the Colonials extended the lead back to 10 at the end of the quarter.

After cutting the lead to nine early in the fourth quarter, a three by Honoka Ikematsu and a bucket by Nina Augustin pushed the lead back to 14 for the Colonials. The Norse cut the lead back to six with 3:38 remaining, but Robert Morris sealed the game down the stretch with free throws and timely baskets from Laura Carrasco and Augustin.

The game also served as the second annual Victors Hoops 4 Health day, which drew a crowd of 4,844 elementary school students and teachers.

“It was awesome,” Rose said. “It’s cool hearing them say your name. They are looking up to us and it’s amazing to have that many people in one small area cheering us on.”

The Norse will take the floor again on Saturday Nov. 25 when they take on Oakland City at BB&T Arena at 1 p.m..