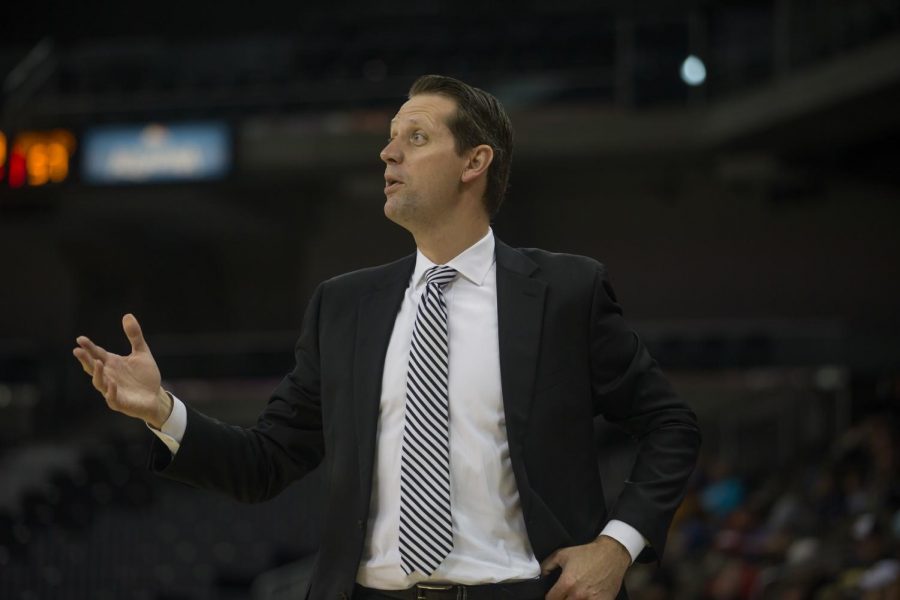 Head Coach John Brannen talks to players during the game against Wilmington.

The NKU men’s basketball team 87-78 in the first game of the Island of the Bahamas Showcase. The Norse improve to 3-0 on the season while the Dukes fall to 1-2.

The Norse were led by Lavone Holland II, who scored 24 points and shot 57 percent from behind the three point line. Holland also dished out five assists and made two steals. Jordan Garnett and Jalen Tate both scored 15 points.

Stuckey Mosely scored 20 points for the Dukes while Joey McLean scored 14 points and made three assists.

NKU shot 60 percent in the first half while James Madison shot just 21 percent. This led to a 44-24 halftime lead for the Norse.

The script flipped in the second half, however. James Madison shot 62 percent in the final half while NKU shot just 36 percent. James Madison was able to cut NKU’s lead down to six points with 41 seconds left, but the Norse were able to close the game out with free throws.

The Norse made just three three point shots in the half.

With the victory, the Norse will play Iona at 8 p.m. Saturday night.