Kent State rally too much for NKU in season opener 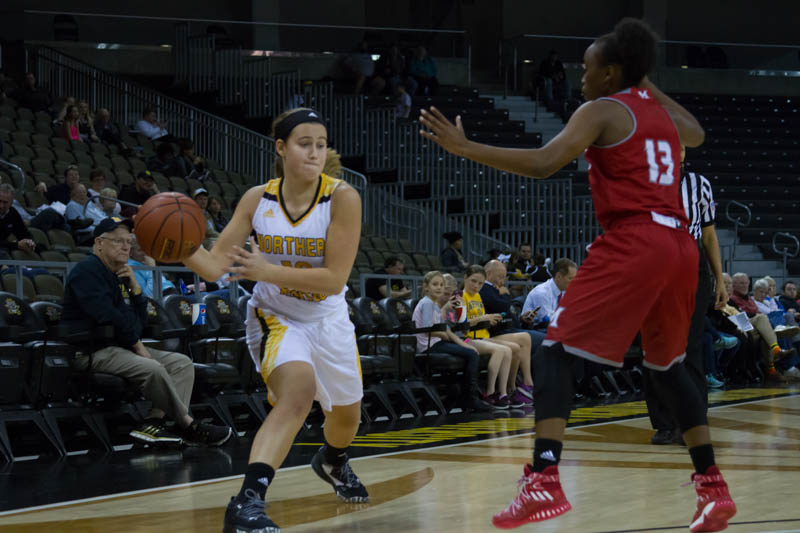 Laura Thomas scored 11 points in a loss to Miami

The NKU women’s basketball team opened the 2017-18 season with a 59-54 loss to Kent State inside BB&T Arena on Saturday afternoon.

“You’ve got to give a lot of credit to Kent State,” said head coach Camryn Whitaker. “They went to their first team all-conference player [Jordan Korinek] in the second half and we really didn’t have an answer for her.”

Sophomore guard Molly Glick led the Norse with 15 points and four rebounds in 22 minutes. Glick was 5-of-9 from the field overall. Freshman guard Grace White kicked off her Norse career with a 12 points, 11 rebound performance while freshman forward Kailey Coffey led the team in rebounds with 12.

Jordan Korinek scored five of the team’s first seven points to help the Golden Flashes come back and tie the game at 22 with 5:46 remaining until halftime. The Norse would then hold the Golden Flashes scoreless for three-plus minutes and go on an 8-0 run to take a commanding 30-22 lead.

The Golden Flashes amped up their defense and held the Norse without a field goal for 10 plus minutes after going on a 13-1 run to start the fourth period to take the lead, 47-45. Trailing by five with 2:02 left to go in the game, White hit a three pointer to put the Norse to within two points, 53-51. However, the Golden Flashes would not relinquish their lead and made six of eight free throws down the stretch to secure the victory.

The Norse struggled offensively in the half, only shooting 18.2% from the field. However, the Norse outrebounded the Golden Flashes in the game, 46-31.

“We didn’t shoot very well in this game,” Glick said. “We’ve got to get in the gym, get some extra shots up and take care of the ball.”

The Golden Flashes were led by Korinek who finished the game with a career-high 29 points. She also was 11-for-13 from the free throw line while adding four rebounds and two blocks.

“We are very inexperienced,” Whitaker said. “I refuse to use that as an excuse because we have good players that know how to win and we will continue to improve.”

The Norse look to rebound as they travel to Normal, Illinois to face the Redbirds of Illinois State University on Wednesday, Nov. 15th at 8 p.m. EST in Redbird arena. The game will be televised on ESPN3.