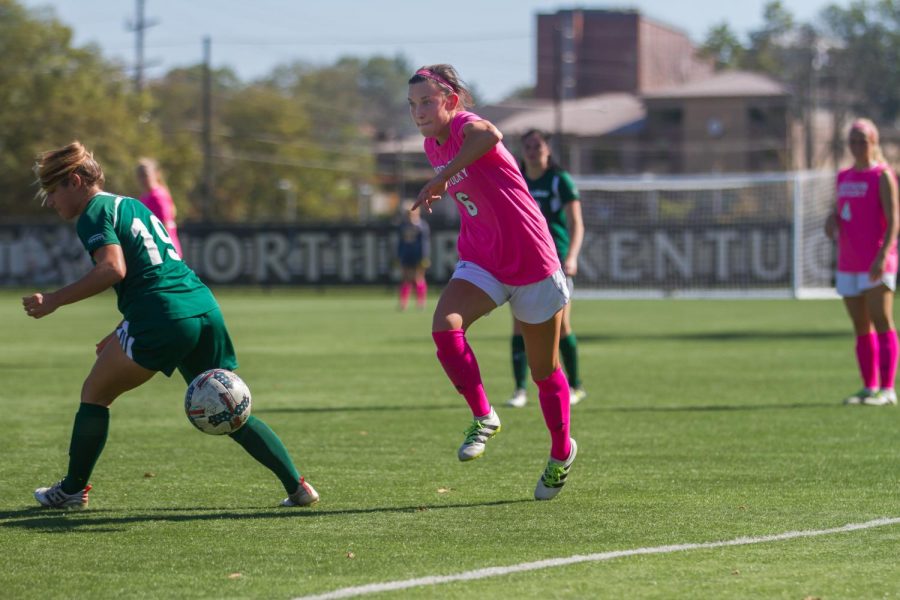 The Northern Kentucky women’s soccer team defeated Oakland 3-0 Wednesday night in Oakland. The Norse improve to 9-4-1 and 6-0-1 in the Horizon League while the Grizzlies fall to 2-13-1 and 2-5 in league play.

With the victory and a 6-0 Milwaukee victory over previous league leader IUPUI, NKU is now in sole possession of first place in the Horizon League standings heading into Saturday’s match with Cleveland State.

The Norse started the scoring in the 13 minute, when Samantha Duwell scored her second goal of the season on an assist from Ally Perkins.

In the 29 minute, forward Macy Hamblin was able to score her ninth goal of the season on an assist from fellow forward Jessica Frey.

Perkins scored the final goal in the 65 minute on an assist from Hamblin. The goal was the second of Perkin’s season.

The Norse shot 15 times and were able to put nine shots on goal while limiting Oakland to just two shot attempts in the match. Norse goalkeeper Emily Lohmann saved both shots.

The Norse will play their final home match of the season against Cleveland State on Saturday at the NKU Soccer Stadium. The Norse will honor their four seniors Macy Hamblin, Jessica Frey, Kayte Osterfeld and Elizabeth Wittwer.

The match starts at 7 p.m. and will be available to stream on ESPN3