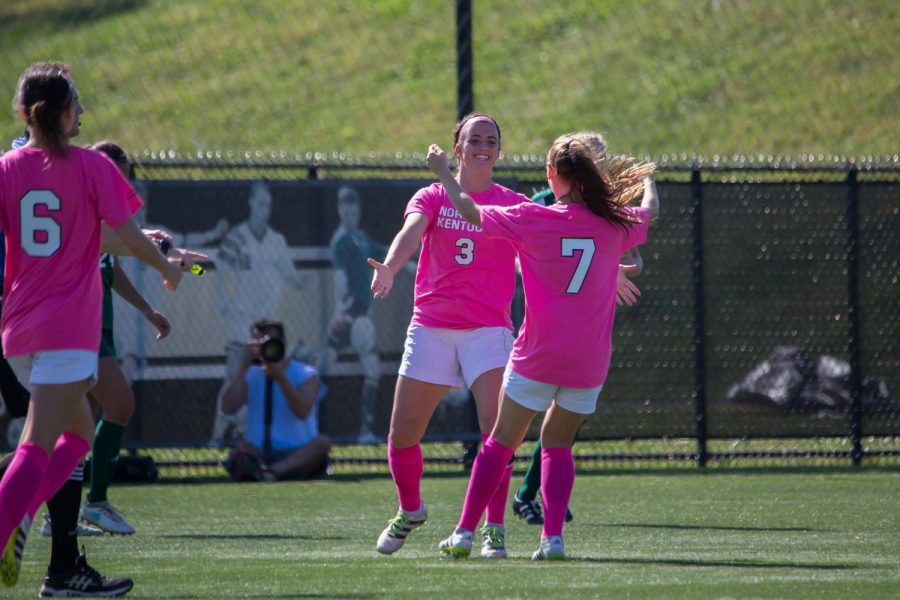 The NKU women’s soccer team hasn’t lost since they fell 2-1 to Xavier a little over a month ago.

“Our finishing was exceptional. In the final third we were fantastic, certainly in the first half,” head coach Bob Sheehan said.

Despite the win, Sheehan wasn’t pleased with certain aspects of his teams play in this match.

“I thought we struggled with possession and gave a lot of balls away,” Sheehan said.

In the eighth minute, Ally Perkins crossed a ball from the left side into the box, where Macy Hamblin was waiting to put the header in the left side of the goal. The goal was Hamblin’s seventh of the season and Perkins’ fourth assist and gave the Norse a 1-0 lead.

“It was a really good cross by Ally Perkins and I was just in the right place at the right time,” Hamblin said.

The Norse struck again in the 18 minute, when Payton Naylor made a run down the right side of the field and crossed the ball into the box for Jessica Frey, who slid in front of her defender and scored. The goal was Frey’s 10th of the season and Naylor’s sixth assist.

“Payton played an amazing ball in,” Frey said. “We’ve been working on front post runs and it’s good to finish it.”

In the 32 minute, Alex Zeller collected a deflection in the box and put a laser shot past reigning Horizon League Defensive Player of the Week Emily Lohmann to put the Phoenix back within one.

A minute later, Shawna Zaken collected a Green Bay deflection in the box and tapped it to Hamblin who proceeded to put the ball in the back of the net for her second goal of the game and eighth of the season.

“Shawna worked hard and won it off the line, played it back and I slotted it in,” Hamblin said.

Hamblin said both of her goals were the result of her teammates working hard. As for her, Hamblin said she has finally gotten into the rhythm of the season, as she has three goals in the last two games.

“I’m definitely on the upside now and just telling myself to come out here and put everything else aside for me team,” Hamblin said.

The Norse controlled possession for the majority of this match, shooting 14 times and putting four shots on goal while the Phoenix managed just six shots in the match.

Being undefeated in conference play has helped the Norse confidence rise after the slow start to the season.

“We started off slow but we weren’t really too worried because we did last year as well,” Hamblin said. “Coach got on us, got us where we needed to be and now I think we are on the up-rise and we are where the team needs to be.”

Currently, NKU sits in second place in the Horizon League behind IUPUI, who is 6-0-0 in conference play and 12-3 on the season. Milwaukee sits right behind the Norse in the standings with a 3-0-2 record in Horizon League play and are 11-0-3 overall.

The Norse, barring a three game losing streak to end the season, will most likely secure a home playoff match and will finish no lower than third in the Horizon League. The question will be if they are able to secure a first round bye as a one or two seed.

“That’s what we are working towards,” Hamblin said. “That’s what coach said before. He said, ‘We can come out here and we are going to be the one’s who chooses what our destiny is.’ I think we came out here, competed and did what we needed to do because at the end of the day the goal is to get home field advantage and a first round bye.”

Some clarity will be provided this week, when IUPUI and Milwaukee square off on Wednesday. NKU finish out the season with Oakland, Cleveland State and will play IUPUI in their final regular season match of the season.