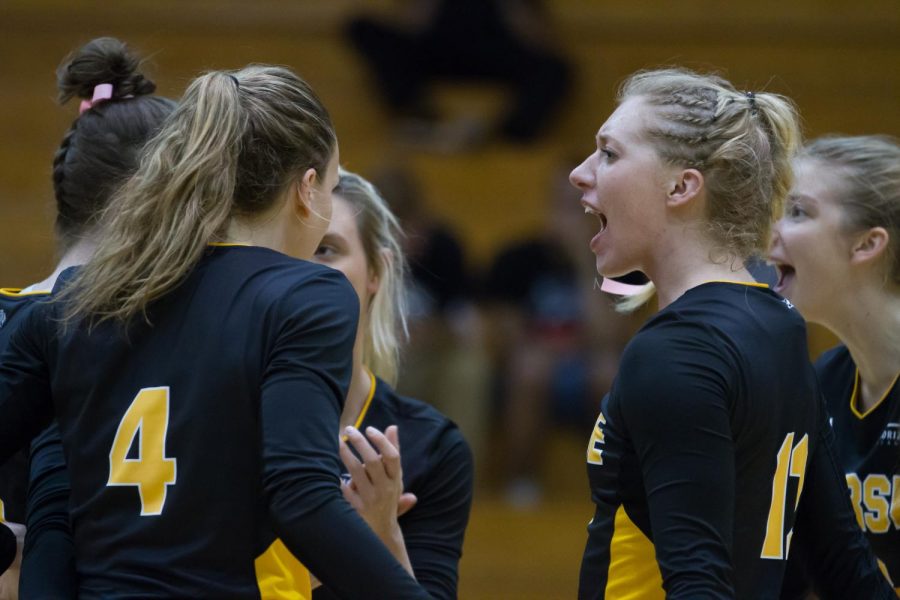 NKU celebrates after earning a point in the game against Milwaukee

In the first set, the Norse grabbed the victory 25-21. NKU started the scoring off quickly but found themselves down after a 5-0 run by the Panthers. Milwaukee was able to control the set until the Norse regained the lead 14-13 and never looked back. Freshman Kaelin Gentile and senior Drew Hendricks tacked on four kills each in the set and hit .444.

Milwaukee found their groove in the second set, winning the 25-22 and tying the match at one set each. Both teams traded blows early on in the set, no team allowing more than a three-point lead. The set was tied at 22 before the Panthers went on a three-point run to close the set. There were seven ties in the set. Milwaukee hit at .326 in the set while NKU hit .209.

In the third set, the Norse took a 25-17 set victory. Milwaukee struck first for the set’s first two points but found themselves down 6-2 thanks to a six-point run. The Norse never gave up the lead in the set and had their largest lead in the set at nine points. NKU had a .444 hitting percentage in the set.

The Norse were able to close the door on Milwaukee in the fourth set with a 25-23 victory. Similar to the second set, both teams battled back and forth with points, having 11 ties and four lead changes. The Norse called timeout tied at 23 before the match ended on a two-point run after a kill by junior Haley Libs and an attack error by the Panthers. NKU had three runs of three points in the set.

Libs led the team with 15 kills and senior McKenzie Eskridge led the team with three of the team’s 11 aces. Libs also recorded a double-double in the win. Gentile and Hendricks contributed 12 kills each in the victory.

The Norse will travel to Cleveland State for their Horizon League matchup against the Vikings at 6 p.m. on Wednesday, October 11th. This will be the first meeting of the year for these teams. Cleveland State currently sits at 10-7 on the year and 3-3 in the conference.