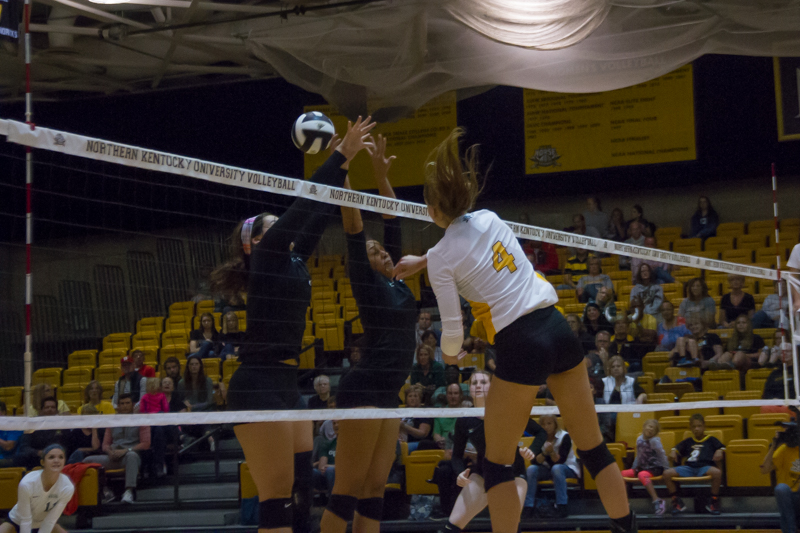 Haley Libs hits a ball past Cleveland State to record a kill. She had 11 kills and 14 digs in the loss.

“It was phenomenal. The girls played so well the entire match,” said head coach Liz Hart. “That takes a lot of guts to stay aggressive when the game is tight and down a point. It was fantastic.”

In the opening set, the Norse struck for the first two points and never looked back as they took the set 25-17. The Norse had their largest lead of the set at eight points with two runs of five points in the set. UIC put up a fight and brought the score to within three but were unable to keep the momentum. Senior Drew Hendricks led the Norse with four kills and sophomore Laura Crawford led the team with eight assists. Hart said the team did a great job keeping their composure in the set.

In the second set, the Flames flipped the script to win 25-17, closing out the set on a three-point run and their largest lead of the set. The Norse struck first but that was the last lead they saw of the set. UIC tacked on a four-point run to start their scoring. The Flames grabbed their first lead of the night in the early part of the set. Freshman Alex Drosopoulou led the Flames with six kills and seven points at intermission. Sophomore Shelby Olsen led the Norse with 17 assists and 10 digs through two sets.

The third set started at a back and forth pace but the Norse came out on top 25-15. The set had nine ties and four lead changes, the final lead change coming in favor of the Norse. After a balanced start, the Norse fired out a nine-point run to firmly establish their lead and claim the set.

“We had to trust ourselves and work as a team,” Hart said. “I’m very proud of the effort and how great of teammates they are.”

In the fourth set, the Flames were able to tie the game at two sets a piece with a 25-21 win. Similar to the third set, the set had back and forth action to start, including seven ties and four lead changes. The Flames went ahead for good after tying the set at 17 and ending on their largest lead of the set at four to push the game to a fifth set.

In the fifth and final set, the Norse grabbed the set and match victory 19-17. The Norse opened up the scoring on a two-point run. UIC was able to grab the lead soon after and would keep the lead until the Norse tied it back up at 11. The Norse battled back from a 14-12 deficit to keep the set going. They didn’t grab the lead until 16-15 and eventually held on after a couple of ties to take the win.

“This was a great moral booster for us to come back and win,” said freshman Kaelin Gentile. “The teamwork was big tonight and every had a great attitude.”

“[Kaelin] did a great job in transition, said Hart. “She made smart plays and had a heavy hand…It’s exciting to see her continue to grow.”

The Norse will host Horizon League foe Milwaukee at Regents Hall for their first meeting of the season Saturday afternoon at 4 p.m..