Norse record fifth shutout of the season in victory over IUPUI 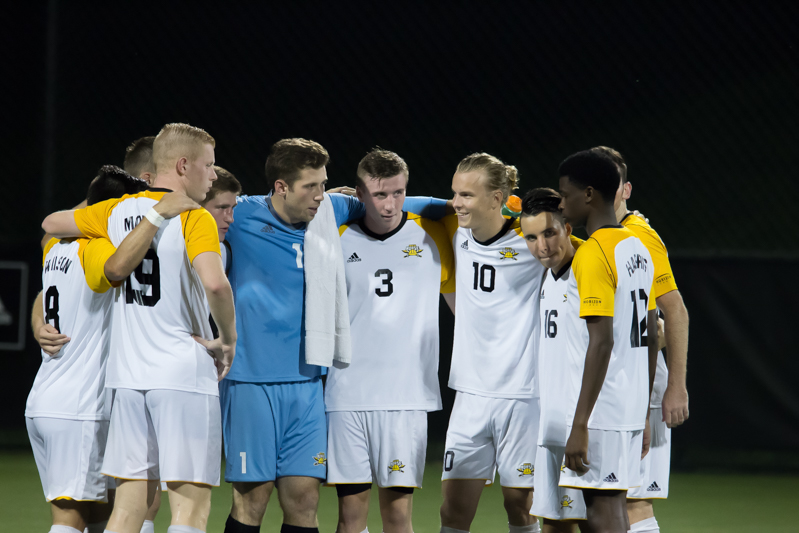 The NKU men’s soccer team recorded their fifth shutout of the season and defeated IUPUI 3-0 in the NKU Soccer Stadium. The Norse improve to 5-1-3 on the season while the Jaguars remain winless with an 0-6 record.

“It was a team (IUPUI) that was down on their luck,” head coach Stu Riddle said. “But at the same time this was probably their last chance to get their season back on track. We had to approach the game professionally, which we did, and we got the job done.”

The Norse got on the board first, when Tom Suchecki split two Jaguar defenders and put the ball in the back of the net. The goal was Suchecki’s third goal of the season.

The Norse were able to dominate possession for much of the first half, collecting six shots while allowing just one Jaguar shot. Two of those Norse shots were on goal.

The Norse put the game out of reach in the second half, when defender Calvin Murphy scored the first goal of his season at the 62 minute.

“Obviously as a defender you focus on getting clean sheets,” Murphy said. “We put everyone in tight and just tried to make a mess in their and get loose, confuse the defender and get someone’s head on it. Fortunately for me it was mine.”

Murphy is one of the few players remaining from last year’s roster and he has noticed a difference in the attitude of the team.

“This year I think there is more of a belief around the team,” Murphy said. “Everyone is out there knowing we can win and wanting to score.”

From there, the Norse would hold off a couple IUPUI attacks and freshman Felix Komolong would score his first career goal to earn the victory. Tonight is just a glimpse of what Riddle is expecting from Komolong in the future.

“We expect him to be arguably our top player,” Riddle said. “This is the first chance we’ve had to see him play and he goes and scores a 30 yard wonder goal.”

The Norse shot 12 times and put six of those on goal. IUPUI shot just six times and managed to only put one shot on the goal.

Goalkeeper Jim Barkei, reigning Horizon League Player of the Week, made just one save in tonight’s match, but it was enough to record his fifth shutout of the year.

“It’s obviously an important position where you have to have consistency and that extends to the defenders as well,” Riddle said. “They are implementing what we work on in training and the end result of that is the shutouts we are getting.”

Barkei also recorded an assist, when he found Komolong down field for the third and final goal.

The Norse will play their final game of the home stand on Monday, when they will face Memphis at the NKU Soccer Stadium at 6 p.m.. The game will be available on ESPN3.