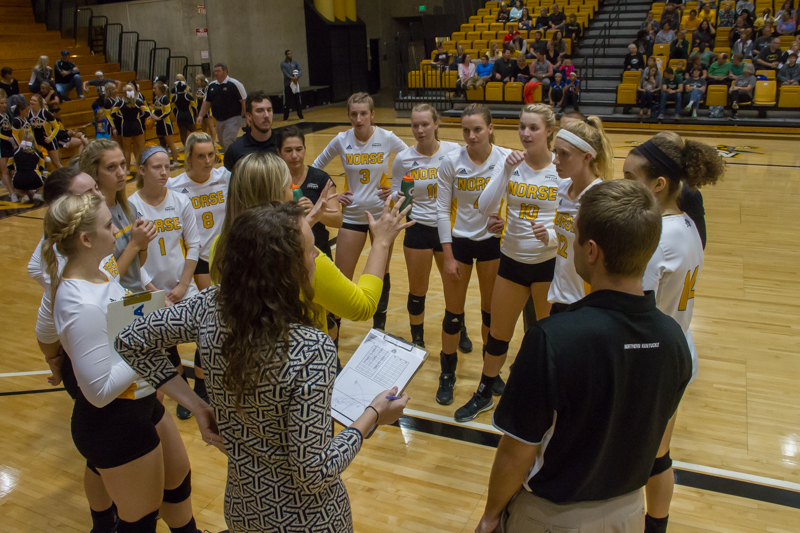 The Norse discuss strategy during a timeout against Cleveland State.

The Northern Kentucky women’s volleyball team lost their first match of the season, falling to the Sacramento State Hornets in four sets (25-18, 26-24, 18-25, 25-23) at the NKU Invitational in Regents Hall, Saturday afternoon.

The Norse (4-1) could not keep pace with the Hornets (6-5) balance attack and stingy defense. The Hornets had 51 kills and brought the wall combining for 20 blocks as a team.

“Sacramento State is a really good team. They will definitely be a top 100 RPI team,” head coach Liz Hart said. “I think they’re really disciplined, mature and experienced. It’s going to  teach us all the things we need to do better.”

In the first set, the Hornets got off to a fast start, taking a 16-9 advantage. NKU trimmed the deficit 21-15 behind the combination of kills from freshman middle blocker Kaelin Gentile and junior outside hitter Haley Libs. However, the Norse were no match for the Hornets Mikaela Nocetti and Shannon Boyle, as NKU fell 25-18.

NKU continued its struggles in set 2, falling behind 8-6 early on. However, the Norse were able to claw their way back and take a late 22-21 lead. Knotted at 24, Sacramento State claimed the last two points off a Laura Crawford (NKU) service error and a kill from Hornets outside hitter Mikaela Nocetti.

Relentless, the Norse opened up the third set with a 7-6 lead early on. Following a Sacramento State timeout, NKU ballooned to 21-13 behind individual kills from Haley Libs, Laura Crawford and Drew Hendrix. The Norse solidified their control by scoring 4 of the last 9 points, clinching the set, 25-18.

Sacramento State came out firing on all cylinders to open the fourth set to take a commanding 7-2 lead. The Norse would rally back behind last weekend’s Duquesne Invitational MVP, Laura Crawford and outside hitter Haley Libs to tie things up at 19 apiece. However, the Hornets were able to capitalize off of three Norse errors and multiple kills from Kennedy Kurtz and Shannon Boyle to secure the victory, 25-23.

The Hornets were led by Mikaela Nocetti who finished with a .217 hitting percentage. Shannon Boyle finished the match with a double-double 13 kills and 21 digs, while Kennedy Kurtz recorded 43 assists.

NKU did end the match on a high-note with 87 digs total.

The Norse look to rebound tonight when they return to action at 7pm in Regents Hall against the Falcons from Bowling Green.

In the first set, Bowling Green started on a four-point run and never looked back as NKU couldn’t grab a lead in the set. The Norse battled their way back toward the end of the set with their own four-point run to bring the score to 24-22 but came up short. Sophomore Laura Crawford led the Norse in the set with four kills and five digs.

The second set saw back-and-forth scoring from both teams. The Falcons started off the scoring and kept their lead until late in the set when NKU tied the set at 23 after a four-point run. Bowling Green was able to hang on for the 25-23 set win, going up 2-0 at intermission.

“We had a complete lack of effort and energy in the first two sets…they out-worked us,” head coach Liz Hart said. “We need to be disciplined and consistent. Everyone needs to do their job and everyone has to expect it from them all the time.”

The Norse found their groove in the third set with a 25-16 set win. Bowling Green scored the first point of the set and never had a lead after that. The Norse went on a six-point run firmly establish the lead, where at one point the Norse lead by 11 points.

“We played a lot harder and worked for the ball in the third set,” Hart said. “We tried to do a different defense on them but it wasn’t executed very well at times.”

In the fourth set, the Norse came out on top again 25-21. In a set that was controlled by the Falcons for the majority of the set, the Norse took the lead 20-19 thanks to a six-point run and didn’t look back, outscoring the Falcons 9-2 at the end to push for a fifth set.

The fifth set saw the end of the Norse’s comeback as the Falcons took the final set and the match 15-8. The Norse were unable to grab a lead in the set as BGSU controlled the set and had their largest lead at seven points.

Laura Crawford led the team with 16 kills and added 17 digs on the night.

“Laura [Crawford] has had a phenomenal sophomore year so far. She’s a huge threat offensively and defensively she is able to cover a lot of court,” said Hart.