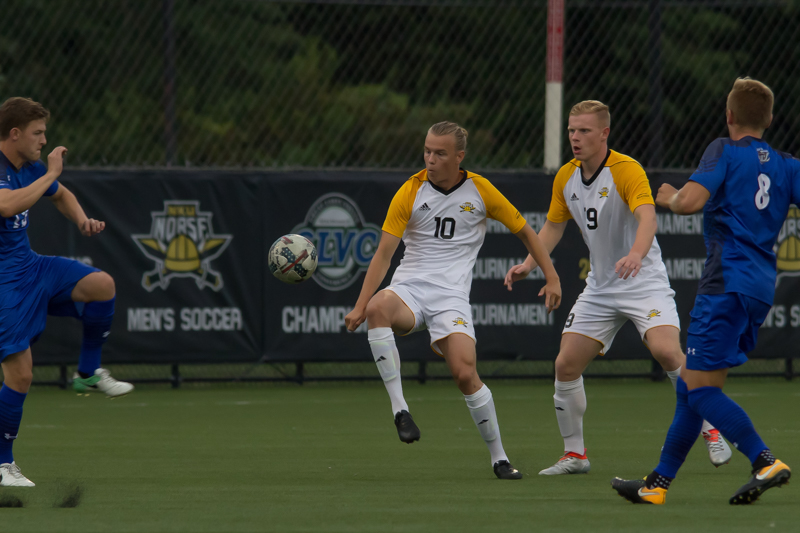 Rikard Lindqvist (10) fights for a ball in the air

The NKU Norse men’s soccer game grabbed their second home victory of the season Thursday night win a 2-1 win over the Fort Wayne Mastodons. The Norse improve to 2-1-0 on the season.

The game was supposed to be played on Friday September 1st but was moved up a day as the remnants of Hurricane Harvey move closer to the Tri-State.

“We doubled our win total from last year which is impressive,” head coach Stu Riddle said. “We did it against a very good team that won nine games last year.”

The Norse struck early in the first period with a penalty kick goal by junior Tom Suchecki for his first goal of the regular season, giving the Norse the 1-0 lead at the fifth minute.

“Rikard [Lindqvist] had one last game and big Tom did it today…it doesn’t matter who takes it as long as it goes in,” Riddle said.

The Mastodons threatened at the 19th minute when a yellow card was given to NKU’s Abdul Kooistra that allowed for a free kick. A diving save by redshirt junior goalkeeper Jim Barkei kept the Mastodons scoreless.

The Norse once again found the back of the net at the 36th minute when sophomore Rikard Lindqvist scored his fourth goal of the season, giving the Norse a 2-0 lead. The score remained the same going into halftime.

The Mastodons finally got on the board thanks to a penalty kick at the 63rd minute from senior Keelan Barker; his first goal of the season. The play was set up after a foul committed by NKU.

In the 72nd minute, Fort Wayne had the chance to tie the game with a penalty kick, but the kick was blocked down by Barkei .

Northern Kentucky had 15 shots in the game, 10 of them coming in the second period. In a hard hitting game, six yellow cards were issued between both teams. A red card was issued at the 89th minute on Fort Wayne’s Adam Gannon.

“It was important for us to win tonight,” Suchecki said. “We needed to get back to our winning ways. We made it our goal to go undefeated at home and after Sunday, we wanted to make sure that’s our only lose.”

The Norse will hit the road for their next game on September 5th as they take on Eastern Illinois at 2 p.m..