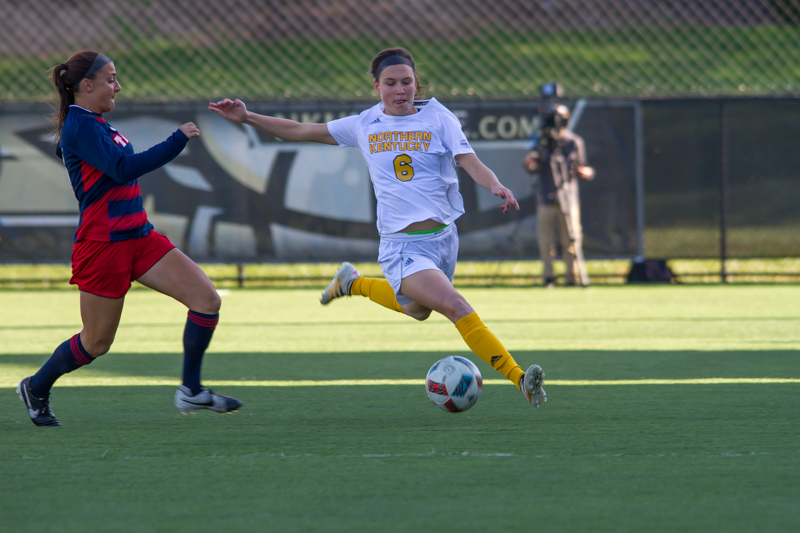 Ally Perkins dribbles down the field against Detroit Mercy. The Norse tied 1-1 with the Titans.

The NKU women’s soccer team defeated Appalachian State 2-1 in extra time on Tuesday afternoon at the NKU Soccer Stadium. The win was the 300th in the career of Norse head coach Bob Sheehan, who has amassed all 300 career victories with NKU. Sheehan is currently in his 21st season with NKU. The Norse are now 3-1-0 on the season.

The Norse and the Mountaineers traded blows at the start of the first half but neither team could put the ball in the net until the 25th minute, when NKUs Emily Soltes recorded her first goal of the season on a penalty kick.

“We were disappointed in our team on Friday night, and I thought our players responded.” Sheehan said.

After the goal, both teams continued to go back and forth, each getting their own chances, but neither team could breakthrough. At the half, NKU led 1-0. Each team finished the half with three shots on goal, but the Mountaineers had the edge on total shots with six.

“We put them under some pressure at various times throughout the match,” Sheehan said. “We talked about, can we play for the whole 90, and it turned out we had to play for 94 and a half.”

In the second half, it was more of the same, but Appalachian State spent more time in the NKU half than they did in the first half. The Norse defense held strong until the final four minutes, when Appalachian State’s Kat Greer scored on a volley to equalize for the Mountaineers.

“I thought we responded really well after giving up a late goal,” Sheehan said. “That can be a very deflating moment for a team when you give up a goal that late.”

It only took NKU four minutes in the extra time period to win the game when Ally Perkins took a free kick from just outside the box. The kick deflected off a defender and found the back of the net, giving the Norse their third win of the season.

“I thought in the overtime period we really came out and put them under a lot of pressure so I was really proud of the way our team responded.” Sheehan said.

NKU scored only one goal on Tuesday without reigning Horizon League Player of the year Macy Hamblin. Hamblin is nursing a toe injury that has caused her to miss the last two games. As of now, there’s no timetable for her return, and she was in a walking boot prior to Tuesday’s game.

“She’s obviously a special player, and she’s a team leader so without her on the field we’re a little different, but we do in fact put 11 players on the field and I thought the players that played in the forward spot gave us some nice things.” Sheehan said.

The Norse host Murray State in their next match at 1 p.m. on Sunday, Sept. 3.