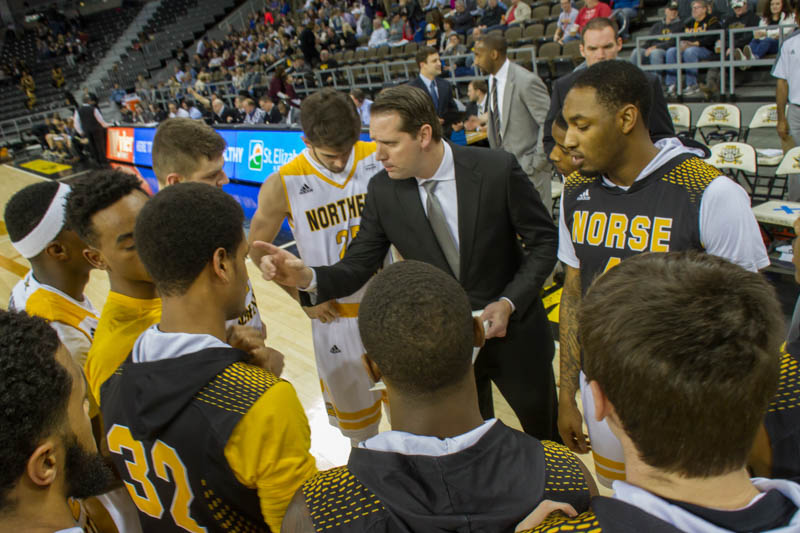 John Brannen coaches up his team prior to Friday's game against Oakland.

NKU men’s basketball coach John Brannen and the athletic department have reached an agreement to keep Brannen in Highland Heights for the foreseeable future.

Brannen signed a four year contract extension Thursday that keep him as the head coach of the Norse through the 2020-2021 season.

The contract will also give him a salary of $300,000 a year according to Bryan McEldowney, the assistant athletic director for media services. His contract also includes bonuses for his postseason performances and the academic success of his team.

“It has been our goal from day one to build a championship-caliber program comprised of first class people on the court, in the classroom and in the community,” Brannen said in a statement. “My family and I look forward to continuing that process in our hometown.”

Even before the Norse won the Horizon League Championship and secured a spot in their first ever NCAA Tournament appearance, NKU athletic director Ken Bothof said he had talked to Brannen about an extension in the regular season.

“John has certainly proven that he possesses the attributes we desire in a head coach,” Bothof said in a statement. “We are excited to reach an agreement to keep John as our head coach for the next four years and to continue building Norse men’s basketball into a championship program that shares equal amounts of success on and off the court.”

Brannen will be entering his third season as the Norse head coach.

The Northerner is working to gather more to details on the specifics of the contract. Stay tuned!