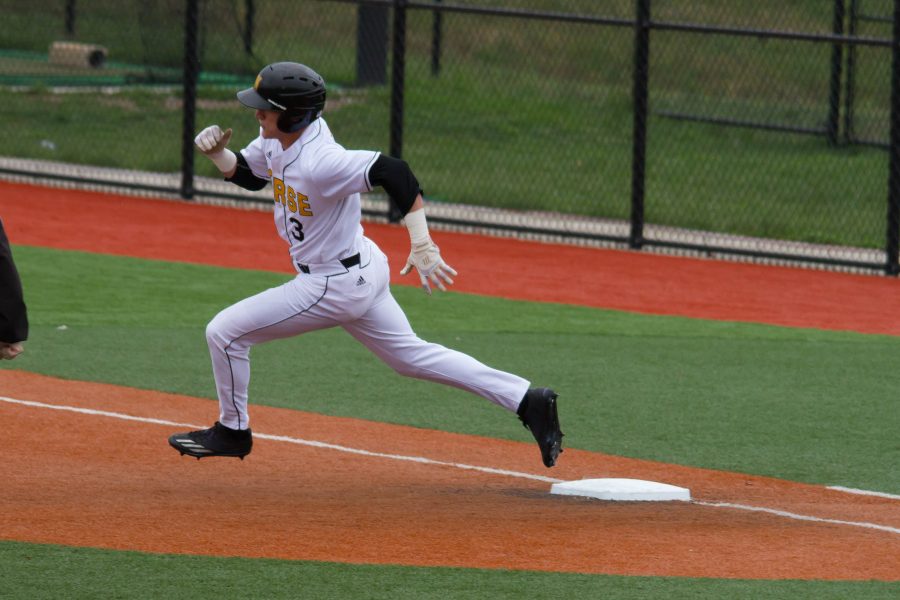 Jake Richmond rounds first base trying to stretch a single into a double.

Lexington, KY- After being down just 3-1 in the sixth inning, the NKU Norse fell to the University of Kentucky 10-1 at Cliff Hagan Stadium. The Norse fall to 21-31 on the season while the nationally ranked Wildcats improve to 37-16.

“It was a good game going into the sixth inning,” head coach Todd Alason said. “It was 3-1 and we were battling pretty good. U.K. is really good and their pitching is really good. I thought we competed pretty good for being banged up. We came to play hard and it was a good workout before conference.”

Brad Schaenzer improved his record to 5-0 while Trey Ganns would take his seventh loss of the season.

Norse pitchers combined to walked 10 batters and hit a batter in the game which accounted for six Kentucky runs.

“You walk 10 guys against a team that is seventh in the country you’re going to get beat,” Alason said.

Ganns walked the first two batters he faced in the second inning, which led to a two out triple by Marcus Carson that scored both runners and gave the Wildcats a 2-0 lead.

The Wildcats scored again in the third inning when Kole Cottam grounded out to Kyle Colletta at short stop to score Tristan Pompey from third to take the 3-0 lead.

Ganns would last just 3.0 innings and allow three hits, three runs and three walks. Asalon said Ganns would have exited the game regardless of the situation to keep the lefty fresh for conference play.

“He could have had a no hitter going and he would have come out,” Asalon said.

Ganns would also go 0-4 with four strikeouts at the plate.

In the fourth, Seth Rosenberg entered the game in the fourth inning for Ganns and quickly loaded the bases with just one out. Rosenberg would recover to strike out Pompey and then got Evan White to fly out to left field to end the threat.

The Norse scored their first and only run in the top of the sixth inning, when Will Haueter singled to left center to score Jake Richmond, who doubled earlier in the inning.

That ended Schaenzer’s night, who finished the night throwing 5.2 innings and allowing three hits and just one run while striking out five Norse.

After striking out the side in the fifth, Travis Rowland allowed a single, a walk and then hit a batter to load the bases for the Wildcats. Connor Heady then doubled off Charlie Jerger to score two runs.

After Jerger hit Cottam with a pitch, TJ Collett hit a single that scored two more runs. Riley Mahan then singled to score another run and give the Wildcats an 8-1 lead.

Kentucky added two more runs in the seventh thanks to a single from Zach Reks. Reks ended his day 2-4 with two RBI and a run scored. Pompey finished the day 2-5 with two runs scored.

Richmond, TJ Alas and Haueter collected the three of the four Norse hits in the game for the Norse.

“I just want us to show up and play hard,” Asalon said. “I want to claim that three seed. You always want to finish as high as possible. I like the way we play.”

Mike Moffatt was not in the lineup today after he was hit in the head with a pitch over the weekend. Richmond played center field while Kyle Colletta, who has recently returned from an injury, took over short stop.

“We’ve battled through a ton of injuries,” Asalon said. “We have guys playing a lot of different positions just trying to get through things.”