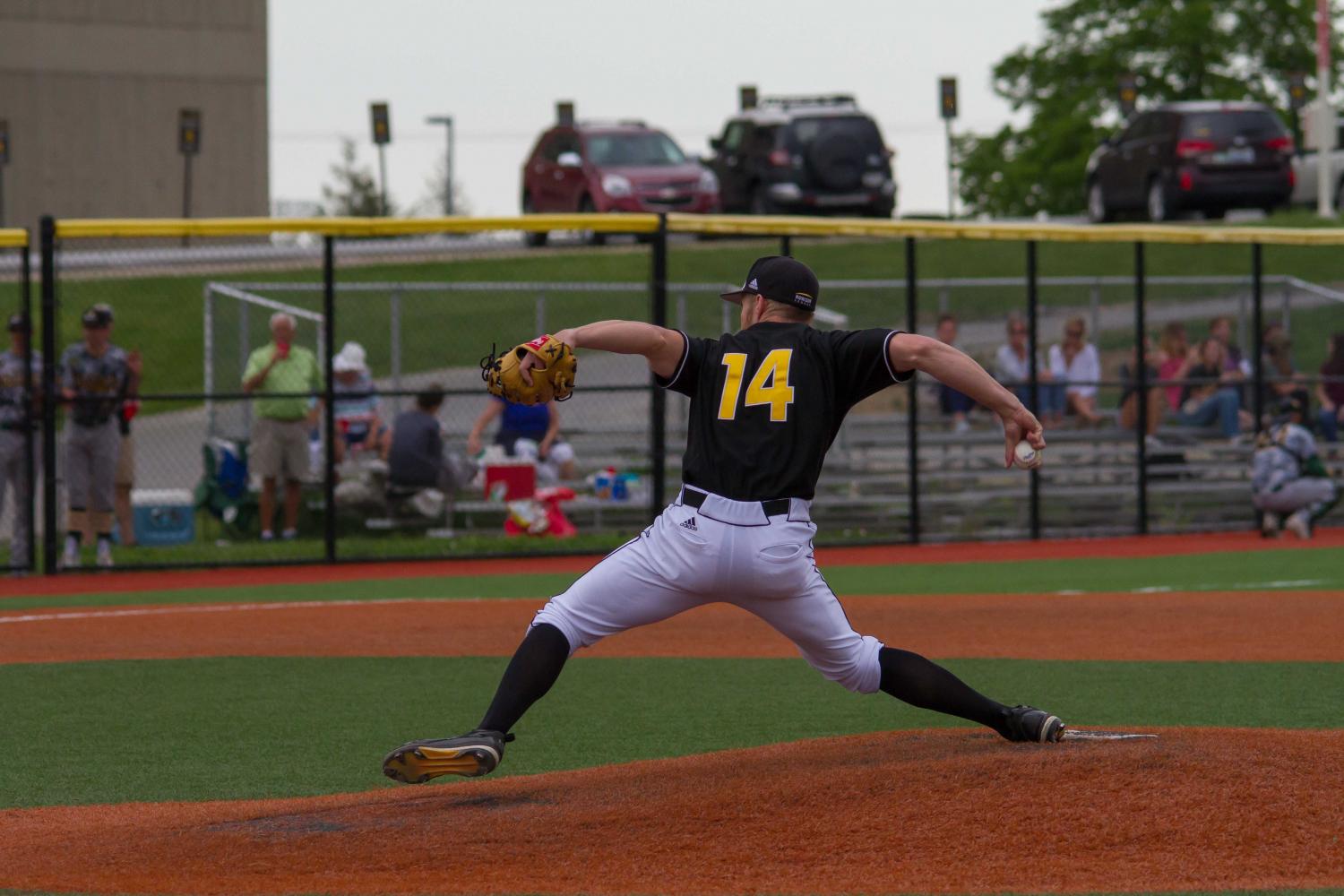 Cameron Ross delivers a pitch to a Wright State hitter.

The NKU baseball team split a double header series with Wright State on Friday afternoon, winning game one 13-10 while falling in game two 13-3.

The Norse will travel to Milwaukee on Sunday to play another doubleheader with the Panthers before returning home next Friday for senior day.

Jean-Francois Dionne got off to a rough start, allowing two first inning home runs to Zach Weatherford and Gabe Snyder to give the Raiders an early 2-0 lead.

A fourth inning triple by Alex Alders scored Kevin Whatley and gave the Raiders a 3-0 lead. The Norse responded in the fifth, when Jake Richmond singled to score Conor Ledger. Later in the inning, Will Haueter scored TJ Alas with an RBI double to centerfield to make the score 3-2.

The Raiders scored a run in the bottom of the inning to make the score 4-2.

The Raiders would earn almost all of it back in the bottom of the sixth that included a Whatley two run homer and a Matt Morrow RBI double that chased Dionne from the game and cut the Norse lead to 9-8.

The Raiders would regain the lead in the bottom of the seventh with a Morrow single that scored two runs to give the Raiders a 10-8 advantage.

The Norse would come roaring back in the eighth and would take the lead for good with another three run bomb from Alas. Brad Bohlen would add an RBI single in the top of the ninth to give the Norse a 13-10 lead.

Cameron Ross would get the win for the Norse while Mark Meyer took the loss for the Raiders.

Pat Kelley got roughed up in his first start since returning from an injury, giving up four runs in the first two innings. Charlie Jerger came in to relieve Kelley, and pitched two innings of one hit no run baseball.

The Raiders, however, would not be held down for long. In the fifth inning, the Raiders scored five runs off Joe Martin, who lasted just 0.1 innings and allowed three walks. Catcher Cory Heffron hit a double that scored three of the five runs in the inning.

The game remained 9-0 in until the eighth inning, when the Raiders jumped on pitcher Brendan Alas for four runs. Gabe Synder capped the inning off with a three run homer to give the Raiders a 13-0 lead.

Alas hit another three run blast in the top of the ninth inning, but it wouldn’t be enough to catch Wright State.

Ryan Weiss got the victory for the Raiders, going 7.0 innings and allowing just two hits and no runs while striking out six Norse hitters. Kelley would take the loss for the Norse.