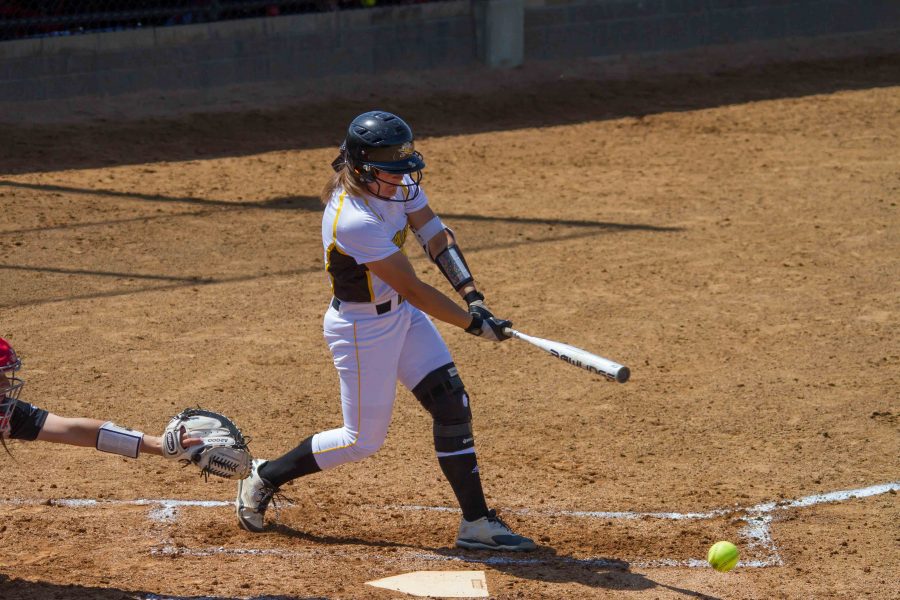 Paige McQueen connects with a pitch against Youngstown State

The NKU softball team split an odd double header with Green Bay on Sunday afternoon. The Norse lost 7-3 in the first game, which was a continuation of Friday’s rain shortened game.

The Norse capped off the day with a 12-4 route of the Phoenix.

It was also the final home game for NKU’s three seniors; Dani Devlin, Charlie Nolen and Paige McQueen. All three were honored with a framed jersey.

“They led us all season,” said head coach Kathryn Gleason. “I give them a lot of credit. They are the ones who paved the way. Charlie has led us on the mound, Dani led us at the plate and catching and Paige did everything we asked of her.”

The Norse improve to 14-35 and 8-13 in the Horizon League. They will travel to play a three game series with Wright State on Tuesday and Wednesday to wrap up the regular season.

Valparaiso currently holds the sixth seed in the tournament and they are currently 11-10 on the season. They play Wright State next weekend, but currently hold the tiebreaker over NKU.

The Raiders are the current five seed in the tournament with an 11-7 record. The only way the Norse will have a chance at the six seed is if the Raiders lose all six of their remaining games.

The Norse and Phoenix picked up in the fourth inning after the game was postponed Friday afternoon due to weather. Ashlynn Roberts took to the circle for the Norse. In that first game, the Phoenix took the early 3-1 lead. All three runs came in the third inning off a groundout and two RBI singles. The Norse answered in the bottom of the third when Ava Lawson hit a single to score Rossiter.

Action resumed in the top of the fourth, where the Phoenix struck again with a two-run home run by Allie Taylor that sailed over the right field wall to make it 5-1.

The Norse threatened in the bottom of the sixth with two runners on base with one out. Kailey Rossiter was robbed of a hit and potential RBI by an inning-ending diving catch by the left fielder Abby Brinkmeier.

Allie Taylor showed off her power again in the sixth inning with another two-run home run, this time over the left field wall, which made it 7-1.

Sinead Korvela took to the circle to go the distance in the bottom of the seventh. A four-pitch walk put Ferrante on first when Alina Mayer hit a two-run home run over the left field wall to trim the score down to 7-3. The Norse would go down in order from there.

Roberts suffered her 14th loss of the season. Alina Maher had two hits including her third home run on the year with two RBI.

McQueen took to the circle to start game two and got off to a rocky start, loading the bases in the first inning. The Phoenix could not plate a run however, thanks to a 9-3 double play..

In the bottom of the first the Norse came out swinging. Kailey Rossiter led the game off with a base hit. Sydney Ferrante smacked a double off the center field wall, allowing Rossiter to score from first, giving the Norse a 1-0 lead.

Later in the inning, Alina Maher picked up where she left off in game one with a two-run home run, giving the Norse a 3-0 lead, her fourth on the season.

The Phoenix got a run back in the top of the second off a throwing error from first baseman Ashley Rains, allowing the runner on third to score.

NKU answered back in the home half of the third. A walk to McQueen and a single by Isabell Alexander with one out set up a sacrifice fly to right field by Rossiter to score McQueen.

The Phoenix were able to grab a run in the top of the fourth starting with a one out triple by Chyanne Onstad. This led to two more hits including an RBI single by Allie Taylor, cutting the lead to 4-2.

In the bottom of the fourth inning, the Norse explode for seven runs on five hits. Rossman exited the game after two batters. Kelly Christensen replaced her. A pair of sacrifice flies by Rossiter and Ferrante added the first two runs, followed by a passed ball to score another.

Summer Libecap added two more runs off a single and Brummell added another off a double to center field. Freshman Morgan Glover entered the game to pinch hit and grabbed her first hit and RBI of the season. The Norse led 11-2 after four innings of play.

McQueen stayed in the game going into the top of the fifth, looking to get the run-rule but gave up three two-out hits allowing the Phoenix to avoid the run-rule by grabbing two more runs and making the score 11-4.

Sinead Korvela entered the game to pitch for the Phoenix in the bottom of the sixth. A leadoff double by Ashley Rains and a single by Libecap set the stage for McQueen to deliver the final blow of the game, a walk off single to left field.

“It was incredible. That is all I was focused on, it’s a really great feeling,” McQueen said. “It was a team effort and I’m proud of everyone.”

McQueen picks up the her first win of the season and her second win in her career. Rossiter, Ferrante, Maher and Libecap all had two RBI in the game.