Norse drop both games of Friday DH with Cleveland State 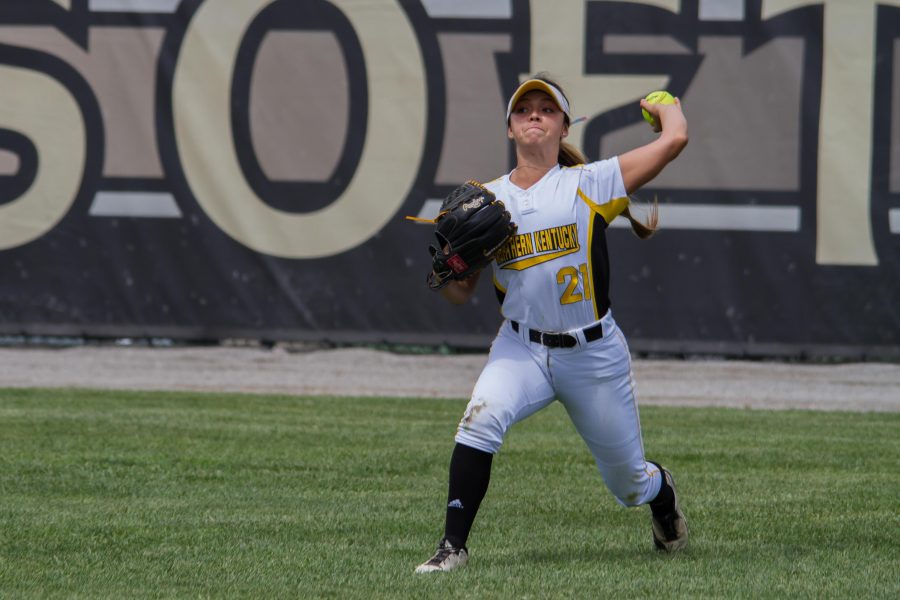 Northern Kentucky and Cleveland State battled it out in Horizon League play Friday afternoon in a doubleheader that was originally scheduled for April 22nd, but was moved due to inclement weather projected to hit the area.

The Norse are scheduled to play game three of the series on Saturday at noon weather permitting.

The Vikings struck early with a two-run home run off the bat of starting pitcher/designated hitter Mackenzie Joecken and scored another run to grab a 3-0 lead in the top of the first.

The Norse were able to counter back in the bottom of the first with a three-run home run by Dani Devlin. This was her 13th on the year and 30th RBI, both of which lead the team. Kara Meter also legged out a triple in the inning.

The Vikings would regain the lead in the third with a two-run single and a sacrifice fly followed by an RBI single in the fourth, making it a 7-3 game and knocking Norse starting pitcher Charlie Nolen from the game.

Taylor Gunther came into the game to retire the rest of the fourth inning.

Joecken recorded 13 consecutive outs from the first inning to the bottom the fifth inning, where Kailey Rossiter broke the streak with an infield single. Joecken then allowed another base runner before exiting the game. The Norse, however, were unable to plate the two runners in the inning.

The Norse showed signs of life in the bottom of the seventh with three straight hits including an RBI double off the right field wall off the bat of Sydney Ferrante and a sacrifice fly by Dani Devlin, her fourth RBI in the game.

The Norse could do no more after that, popping out twice to retire the side and end game one with the final score of 7-5.

Joecken earned the win for the Vikings while Nolen took the loss and falls to 6-9 on the year. Taylor Ginther pitched the final three innings for the Norse and allowed just one Viking hit.

The Vikings once again drew first blood with an RBI single in the first inning to get out to a 1-0 lead against Norse starter Ashlynn Roberts.

The Norse opened the bottom of the first with a leadoff walk and stolen base by Toree Stalter, her third stolen base on the year. Dani Devlin smacked a single to right but was thrown out at second on the throw. Stalter was then tagged out at home for an unconventional double play 9-4-2 and resulted in a scoreless inning for NKU.

The Vikings scored two more runs in the second inning after a two out single and an error by shortstop Toree Stalter that lead to a two RBI single.

NKU came out swinging in the bottom of the third with two one-out singles and a Vikings’ error but could not plate any across.

After a leadoff double in the top of the fifth, the Norse were able to strand the runner with three straight outs, topped off by a beautiful diving snag from second baseman Paige McQueen.

Roberts was replaced by Taylor Ginther in the top of the seventh after giving up a leadoff single. That base runner would come around to score to give the Vikings a 4-0 lead.
The Norse show late signs of life as they mustered a run off an RBI single from Kailey Rossiter. However, it was too little too late as the NKU fell the Cleveland State 4-1.

Coaches and players were unavailable for comment after the game.