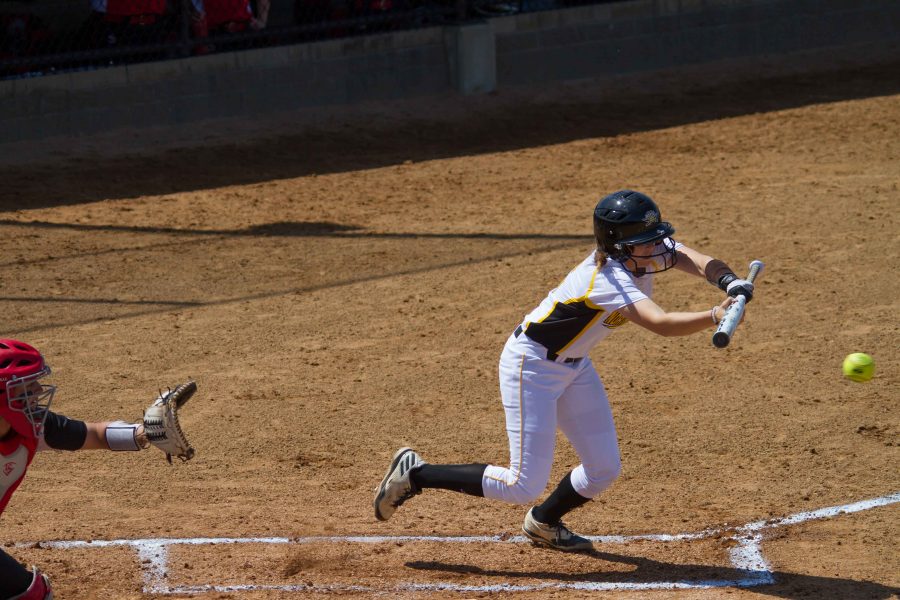 Toree Stalter lays down a bunt against Yougnstown State

“It’s huge,” senior Dani Devlin said. “We were picked ninth in the Horizon League for preseason so everyone kind of sees us as an underdog. So it’s really great to run rule two out of three games.”

“It’s a huge win for us,” head coach Kathyrn Gleason said. “Going forward we are still playing for the tournament. I think our kids were just relaxed and had energy and enthusiasm all three games.”

Charlie Nolen pitched all five innings and allowed just two hits, one of those hits being a three run home run in the fourth inning.

“She just needs stay within herself and throw her pitches like she knows how to,” Gleason said. “She is the only national champion on our team. She won a national championship in junior college. She has the mentality of a bulldog and when she wants the ball she takes it.”

The Norse struck in the third inning, when Zahrya McFarland doubled to lead off the inning. After a sacrifice bunt by Kailey Rossiter and an infield single by Toree Stalter, Sydney Ferrante singled through the left side to score both McFarland and Stalter.

Devlin then hit a two run home run to right center field to clear the bases and give the Norse a 4-0 lead.

Youngstown State would respond in the top of the fourth, with a three run home run from Sarah Dowd that cut the Norse lead to 4-3.

The Norse would recover in the bottom of the fourth, when Ferrante singled to center field to score Paige McQueen and Rossiter. A few batters later, Kara Meter singled to score Ferrante to give the Norse a 7-3 lead. Later in the inning, Ava Lawson legged out an infield single to plate Devlin and Meter to give NKU a 9-3 lead.

Ferrante ended the game in the fifth inning with another two run double that scored Rossiter and McQueen to give NKU the 11-3 victory.

Ferrante ended the day 3-4 at the plate with six RBI and two runs scored. The six RBI are the most RBI in a game y a Norse in the Division I era.

In the series with the Penguins, Ferrante went 6-12 with nine RBI. She is now hitting .268 on the season.

“It feels nice,” Ferrante said. “It’s about time. It feels good to run rule a team too.”

The third baseman had been struggling batting lower in the line up last weekend, so Gleason decided to move her up to second in the line up.

“She has flourished at third base. Last weekend she struggled a little bit and we had her down in the lineup and the last game I said lets move her back to two and she hit two home runs,” Gleason said.”She’s just been see the ball really well and she’s just a calm easy going kid.”

Devlin hit three home runs against the Penguins this series, including the two run homer Thursday. After being the everyday catcher for the majority of her career and the beginning of this year, Devlin has transitioned into the designated player role.

“You worry about seniors sometimes,” Gleason said. “She has really taken over that designated player position so all she has to worry about is hitting. She knows she isn’t going to see a lot of good pitches. I wouldn’t want to pitch to her. She’s a threat at the plate every single time.”

The Norse will travel to Chicago tonight and begin a three game series with UIC on Friday evening. The Flames are currently first in the Horizon League standings with an 11-1 record in conference play.

“They have a great pitcher in Elaine Heflin and we’ll try to limit our chances in seeing her,” Gleason said. “I just like our easy going energy going into the game. They feel good.”

Ferrante hopes that energy and the team’s story hitting will translate into victories this weekend.

“Our bats are hot right now,” Ferrante said. “So hopefully we keep that and our strong defense and good pitching and hopefully play some good games this weekend.”