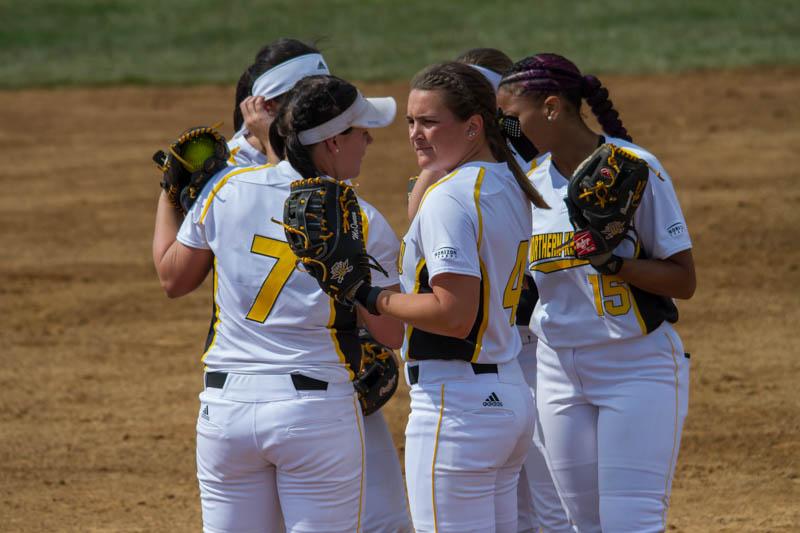 The Norse gather at the mound prior to the start of the inning against Valparaiso.

The NKU softball team dropped two out of three games to Detroit Mercy over the weekend in Detroit. The Norse are now 9-25 overall, and 3-6 in conference play.

Toree Stalter ripped a bases loaded single to score two runs and begin the scoring. Two batters later, Kara Meter hit her first home run of the season, a 3-run shot that extended the lead to 5-0.

The Norse added another run in the fifth inning to make it 6-0. Detroit plated two runs in the seventh, but Nolen finished the job, and the Norse took the first game of the series.

The Norse scored in the first inning of the second game when senior Dani Devlin hit her first home run of the season. NKU starter Ashlynn Roberts struggled to hold the Titans down, allowing six runs on seven hits in five and one-thirds innings pitched.

A two-run double in the third inning gave Detroit a 2-1 lead. In the fifth inning, Ava Lawson drove in Isabell Alexander to tie the game at two. NKU scored three more times in their half of the sixth to hold a 5-2 lead over the Titans.

In the sixth inning, Detroit slugged two home runs and scored four total runs to give them a 6-5 lead heading into the final frame. The Norse were retired in order in the top half of seventh to split the series at one game a piece.

The first two games of the series were played as a doubleheader on Saturday, with the rubber match being played on Sunday.

Vega Theophilus started the game for NKU, but couldn’t get out of the first inning. Giving up four runs, two earned, on four hits in just two-thirds of an inning pitched. Charlie Nolen came in to relieve Theophilus.

NKU answered back in their half of the third inning after a 3-run home run by junior Sydney Ferrante to bring the deficit to just one run. In the bottom half of the third, Detroit answered with three runs of their own to keep the lead at four runs.

Detroit then scored one run in the fourth, fifth, and sixth innings. NKU added runs in the fifth and seventh, but couldn’t overcome the hot hitting of the Titans, and dropped the season finale 10-5.

The Norse return to Highland Heights this week for a three game series with Youngstown State. The series begins on Tuesday April 11 with a doubleheader against the Penguins. The games are at 2 p.m. and 4 p.m., and will be televised on ESPN3.

The final game of the series will be played Wednesday April 13, at 2 p.m..