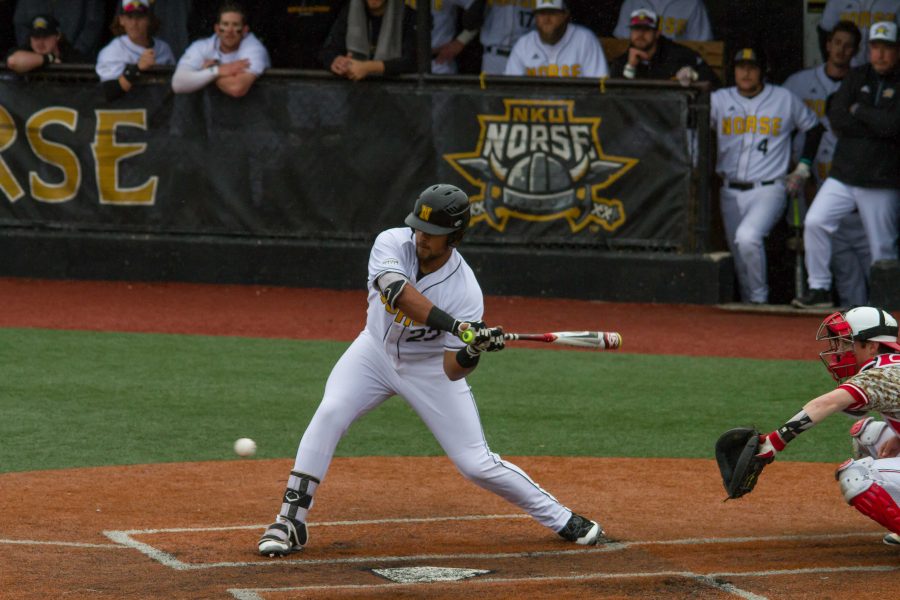 The NKU baseball team fell to Youngstown State 8-7 on Saturday afternoon. The Norse fall to 9-16 on the season and 4-1 in the Horizon League while the Penguins improve to 6-17 and 3-5 in league play.

“It was a good college game,” Asalon said. “Two teams playing hard and playing pretty decent for the most part.”

The two teams combined to hit six homerun, four of those homeruns coming off the bats of Norse. The Norse scored all seven of their runs via the longball.

Kyle Colletta finished the day 2-4 with a homerun two RBI and two runs scored while Mike Moffatt went 2-4 with a run scored. Trey Ganns went 2-5 at the plate with a homerun, but took the loss for the Norse on the mound.

Anthony Rohan went 2-4 at the plate for the Penguins with an RBI and a run scored while Andrew Kendrick went 3-4 with two homeruns and four RBI.

After pulling ahead 2-1 with a Kyle Colletta two run homer in the second inning, Trey Ganns allowed a three run homer to Kendrick in the third inning.

Asalon thinks that was a turning point in the game and believes he should have walked Kendrick in that at bat.

“This ones on me. I need to make better decisions,” Asalon said. “We had a chance to walk Kendrick in the third and we decided to pitch to him.”

Ganns struggled from that point on, lasting just one more inning and allowing another run in the fourth inning. He finished with 4.0 innings pitched and allowed five runs on six hits and struck out six Penguins.

“He lost his focus after that homerun and I think he was frustrated,” Asalon said. “He’s got to be able to overcome that stuff. He wasn’t throwing enough first pitch strikes and got behind and then got hurt.”

After a quiet fifth inning, Travis Rowland and Jordan Menfee allowed three runs in the top of the sixth inning after a bases loaded hit-by-pitch, single, and sacrifice fly to give the Penguins an 8-2 lead.

Asalon has been waiting for Menfee to breakout since last season but hasn’t seen what he needs to see from his hard throwing sophomore.

“He throws hard but you can’t hit a guy with the bases loaded, you  can’t throw into the backstop,” Asalon said. “He’s a great talent and he’s going to be a professional pitcher at some point in his career but right now he needs to be more consistent.”

The Norse began their comeback in the sixth inning, when Dominic Mercurio hit a homerun. Jake Richmond then hit a three run homer that scored Colletta and Moffatt to cut the Youngstown State lead to 8-6.

In the seventh, Ganns homered to right field to cut the lead to 8-7.

Cameron Ross made his 16th appearance, throwing 3.2 innings and striking out five batters while only allowing two hits.

The Norse comeback would fall short however, as Alex Bellardini and closer Joe King didn’t allow a Norse hit in the final two frames. King pitched perfect ninth inning to secure the save for the Penguins.

The Norse will face the Penguins again tomorrow at 12 p.m. for the deciding game in the three game series. Pat Kelley will take the ball for NKU while Youngstown State is scheduled to throw right handed pitcher Jeremy Quinlan.

“Hopefully Pat Kelley can comes out and gives us a good start like he did against Cincinnati,” Asalon said. “He’s got a good fastball, good slider, good change-up and he has to throw all three for strikes. Pat will do a good job for us, he always does.”