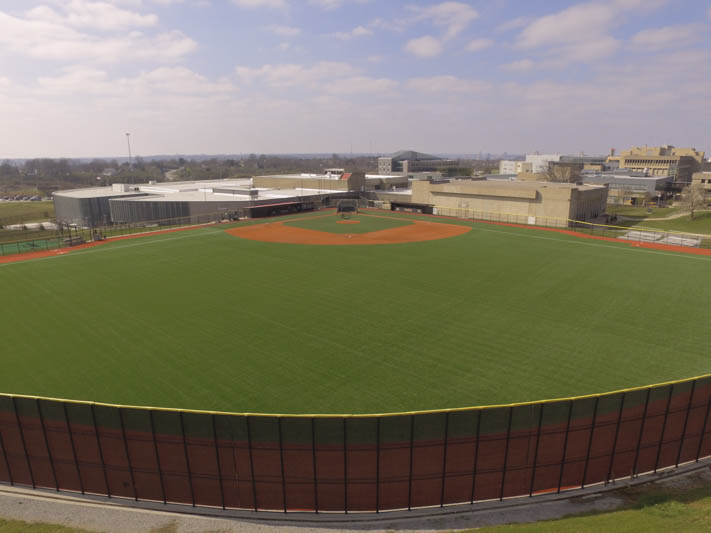 While the NKU baseball team spent much of the month of February away from Bill Aker Baseball Complex, their field was getting a $600,125 makeover.

The outfield of Friendship Field was converted from natural grass to full synthetic turf. MSA architects were the architects for the project while Shaw Sports Turf installed the turf. Ground broke in late January and finished in early March before NKU’s first home series with Milwaukee.

“It’s huge, especially if you talk to my outfielders,” Asalon said. “That outfield just deteriorated over the last few years.”

Chris Hafling, operations and event manager, said the plan all along was to move to a synthetic surface eventually, but the hot and cooler weather last summer forced the athletic department to make the change this season.

“When we put in the infield turf, the plan all along was to eventually turf the outfield,” Hafling said. “At the end of last summer we realized we were either going to have to resod the outfield or turf and decided for long term benefit to go ahead and put synthetic turf out there.”

While many baseball players prefer natural grass, including Hafling who was a baseball player himself, there wasn’t any push back from any NKU players about the decision to move to synthetic turf.

“We all talked through natural versus synthetic,” Hafling said. “The turf will give our athletes a much better opportunity to be competitive. If our university was in Georgia, we would’ve replaced the sod. But where we are at, it makes sense to go to synthetic turf.”

According to senior Kyle Colletta, the Norse used the patchy grass and holes to their advantage in seasons past.

“In the past we’ve kinda used it as a home field advantage but I think it was time for a change,” Colletta said. “It makes everything look better and it’s better for the future.”

Hafling said he has heard nothing but good things about the new turf.

“I asked him (Asalon) to make sure they try out both bullpens and get all over the field and try it all out,” Hafling said. “They came back and were really happy with everything.”

The move to a turf outfield should provide more opportunities to play at home as well as get the Norse on the field to practice more often in the offseason.

“If we have a rain storm on a Saturday morning and we are suppose to play at 2, our outfield in the past would’ve gotten so wet during that time we couldn’t play,” Hafling said. “Now it can pour down rain for two or three hours and an hour after it stops we can play baseball. In January and February as long as it’s 40 degrees outside they’ll be able to get out there and practice.”

It will also provide more opportunities for community-based activities and high school teams to use the field for tournaments during the spring and summer, which could generate some extra revenue for the department.

“We will be able to utilize our field from early in the morning until the sun goes down,” Hafling said. “It will create some rental revenue for us. It gives us the ability to bring in a lot of different people who haven’t been able to play on our campus who will get the opportunity to play on a Division I baseball field,”

Not only does Asalon believe the new field could draw in future recruits, but that it will also help the softball team when their field is too wet to practice on.

“It’s good for recruiting,” Asalon said. “It’s good for softball. They can come up on a bad day and come in the outfield and do their stuff.”

“We need to create a better fan environment,” Hafling said. “Right now we have a really good playing surface. But the area around where we have seating needs to be worked on.”

There is no timetable for improvements to the seating around the baseball field at this time.