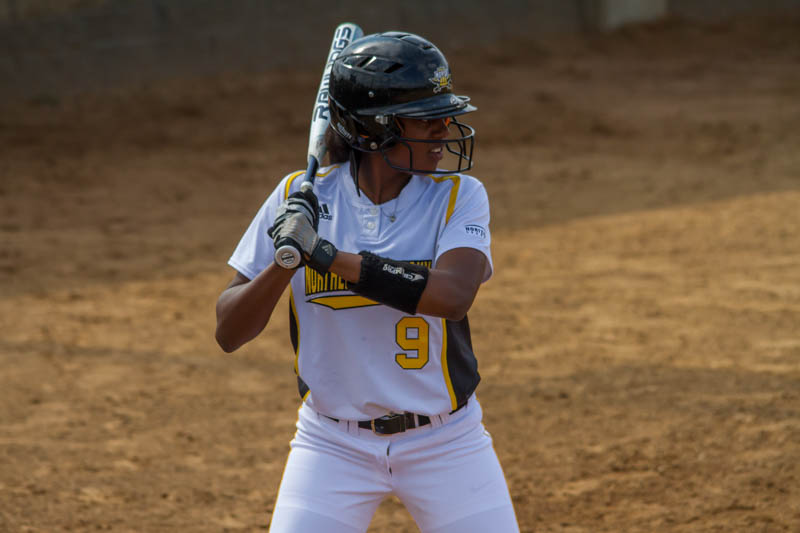 Zahrya McFarland stands in to face Valparaiso on Friday. The Norse would fall to the Crusaders 7-4

The NKU softball team dropped their first Horizon League series of the year to Valparaiso, losing two out of three games.

The Norse will play the University of Kentucky at 4 p.m. on Wednesday at Frank Ignatius Grein softball field

The game remained scoreless until the fourth inning when Jorgi Calombaris homered to get the Crusaders on the board. Dani Devlin followed with a homer in the bottom of the inning to tie the game.

The Crusaders came roaring back in the seventh inning, scoring four runs in the top of the inning off Ashlynn Roberts and reliever Taylor Ginther. Paige McQueen doubled to score Kambra Crist in the bottom of the inning, but couldn’t come any close.

Roberts took the loss for the Norse, going 6.1 innings and striking out 11 Crusaders and giving up four earned runs. Dani Devlin went 2-4 with an RBI.

Norse starting pitcher Paige McQueen gave up five runs in the first inning. The Norse scored three runs in the second inning, thanks to a two run Ava Lawson triple and then a Taylor Brummell sacrifice fly that scored Lawson.

The Crusaders struck again in the fourth inning, when Gabby Magnifico hit a two run homerun. That was followed by a Calombaris double that score a run to make the score 8-3.

The Norse would tie the game in the bottom of the fifth inning, when McQueen hit an RBI single and McFarland hit a sacrifice fly to score another run. Lawson followed with a three run homer to cap off the five run inning.

The Crusaders would respond with a run in the sixth inning, but the Norse would get the last laugh in the bottom of the inning. Sydney Ferrante hit an RBI double to start the sixth inning scoring. McQueen followed with an RBI single and McFarland capped the inning off with a two run homer to left field.

McQueen went 2-3 for the game with two runs and two RBI while Lawson finished 2-4 with five RBI.

The Norse started game three with a bang, scoring two runs in the first inning thanks to RBI doubles from McQueen and McFarland. A Crusader error in the second inning allowed Lawson to cross the plate, extending the Norse lead to 3-0.

The lead wouldn’t last however, after Roberts allowed six runs to score in the top of the third inning including two home runs. McQueen homered in the bottom of the inning to make the score 6-4.

The Crusaders would run away with the game in the fourth inning, scoring five more runs thanks to a double and a homer off Roberts.

McQueen went 2-4 at the plate with a homer while Ferrante went 2-3 with two runs scored and a homerun.