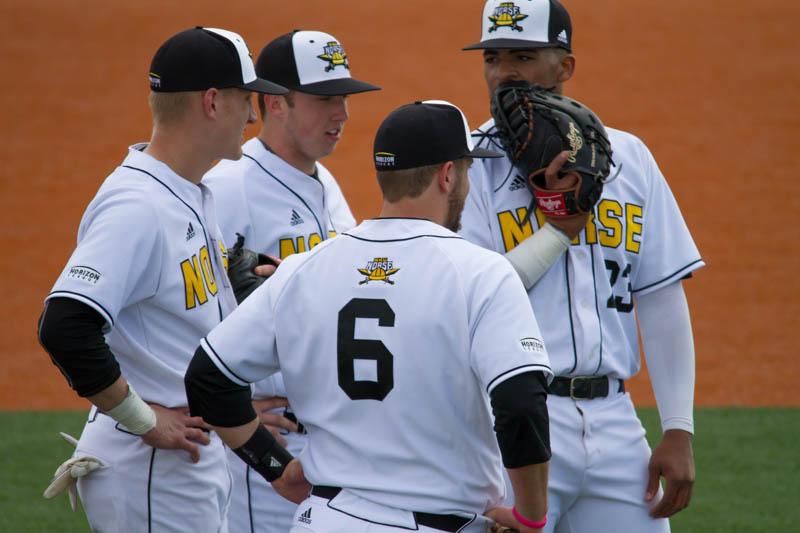 The Norse infield talks things over during a pitching change

The NKU baseball team fell to Eastern Kentucky 10-8 on Tuesday afternoon. The Norse fall to 6-11 on the season while the Colonels improve to 13-9.

The Norse fell behind early in the game, after starting pitcher Brody Basilone gave up four runs on two homeruns in 2.2 innings of work. Seth Rosenberg didn’t fare much differently, giving up four runs in the fourth inning.

The Norse began to rally in the fifth inning, after Ty Amann homered to right center field with Mike Moffatt on base. TJ Alas then took a bases loaded walk later in the inning to score Richmond to make the score 8-3.

The Norse would strike again in the sixth inning, when Brendan Alas mashed a three run homerun to left center field to score Amann and Moffatt.

Just when it seemed the Norse were back in the game, Travis Rowland gave up a two run homerun to Colonels center fielder Daniel McFarland to increase the Eastern Kentucky lead to four runs.

Richmond homered in the eighth to score Amann again, but the Norse couldn’t score after that.

NKU will now travel north to Oxford, where they will play Miami (OH) on Wednesday evening before returning home on Friday to face Cincinnati.