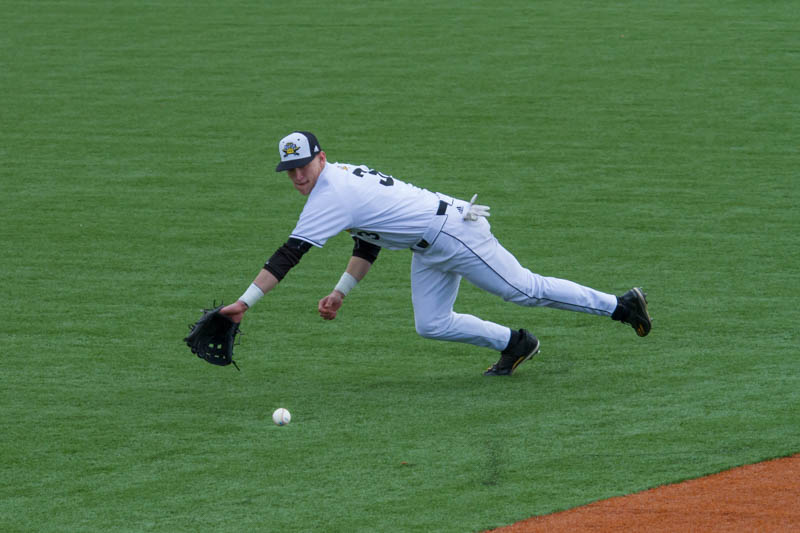 Jake Richmond makes a diving stop at short stop. He hit two homeruns on the day

After a slow start in the first seven games of the season, shortstop Jake Richmond has come alive in his first season as a Norse and crushed the ball in his first Horizon League series against Milwaukee.

This weekend head coach Todd Asalon shuffled his lineup a little bit and slotted Richmond in the leadoff spot instead of batting him second where he had been most of the season.

“He’s a really good hitter. Once we put him in the leadoff spot this weekend that jump started us a little bit,” Asalon said. “He is always on base and that’s where we plan on keeping him.”

Richmond extended his hitting streak to 11 games on Sunday and went a combined 7-14 during the three game series with the Panthers. Not only did Richmond hit .500 during the series, but he slugged .929 and came through in the clutch with six RBI, including the game winning RBI single in game two of Sunday’s double header. He also stole two bases.

Not only that, but Richmond hit his first two homeruns of his college career on Sunday, including a towering homer to left center field in third inning of game two of the double header that made Trey Ganns exclaim, “Oh! That’s gone!” as soon as it hit the bat.

“It felt good. I think I was pressing to try and get one,” Richmond said. “Today I just blacked out and got lucky enough to find a few holes.”

While Richmond didn’t homer in his two seasons as a Cincinnati Bearcat, Asalon says Richmond hit 10 homeruns in summer ball and expects him to continue to show his power ability throughout this season.

Richmond was second on the team in RBI this weekend behind Kyle Colletta, who went 5-10 at the plate and batted in seven runs in three games. He scored the tying run in Sunday’s come from behind victory in game two of the double header.

“We attacked fastballs early on,” Colletta said. “The bats got hot and everything worked out after that.”

With the three game performance, Colletta improved his batting average from .200 to .275

Non-conference game on schedule this week

The Norse play five games in seven days this week, starting on Tuesday when the Norse travel to Richmond, Ky to face Eastern Kentucky at 3 p.m.. They will then head north to play Miami (OH) on Wednesday at 6 p.m..

The Norse will then start a three game series Friday with UC, Richmond’s former team. While it would be good for him to beat his former team, Richmond is more concerned about getting conference wins.

“It will be fun and I’ll be glad to see all the friends I made over there,” Richmond said.

The Norse will play at UC Friday and Saturday, but will then return to Bill Aker Baseball Complex on Sunday.

Asalon said a lot of players will get playing time this week in an effort to keep everyone fresh during this tough stretch of games.

“We”ll throw a lot of freshman out there and get them some reps,” Asalon said. “We are just going to keep competing. We expect to go to Eastern Kentucky and win and then go to Miami (OH) and win. Even though it is a bye weekend for the conference we are still trying to get wins.”

With the wins on Sunday, Asalon sits at 499 wins for his NKU career. just one win will give him 500 NKU career wins.

“I didn’t know that was the case,” Asalon said. “It’s a testemant to coaching good players. It’s exciting and I’m proud of it. I’m proud to be able to do it at NKU.”

Asalon has spent 16 seasons as the head coach of the Norse, with most of his wins coming when the Norse were Division II members. Prior to NKU he coached at Thomas More College and has nearly 650 career wins at Thomas More and NKU combined.