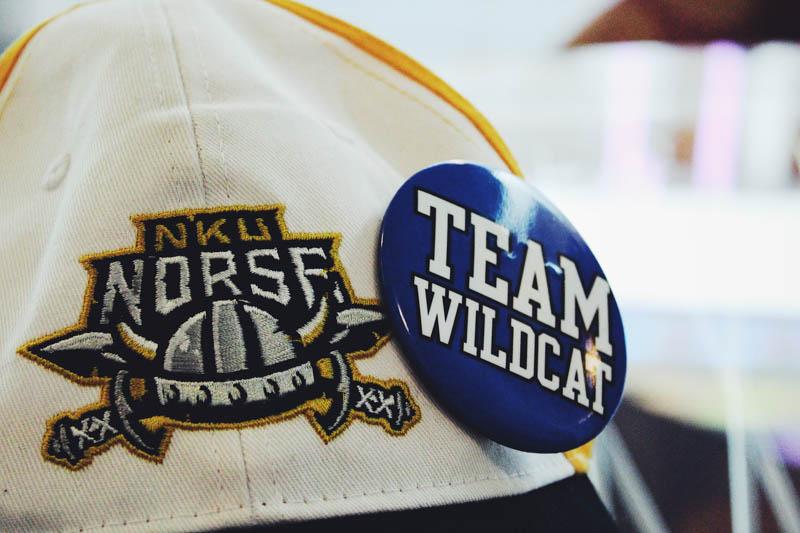 Many UK fans who attend NKU are in the middle of an identity crisis, as the two teams will meet in the NCAA Tournament Friday

A simple stroll through the campus of Northern Kentucky University will reveal a wide variety of sports allegiances.

While most students wear the apparel of the black and gold of the Norse, a large amount of students also wear the blue and white of the Kentucky Wildcats.

Only 75 miles separate the schools, but for many NKU is just where they go to college, while UK basketball is life.

When Greg Gumbel announced to the nation on Sunday that the 15-seeded Norse would be travelling to Indianapolis to play the two-seeded Wildcats, some immediately took sides, while others have struggled to decide which team they would root for.

“When I picked up my phone (on Selection Sunday), I had like seven missed calls and texts from my mom and all my friends back home,” said Nikki Johnson, a freshman Sports Business major at NKU. “I was born and raised a UK fan, it’s all I’ve ever known.”

Johnson joins other fans that were excited, yet disappointed the Norse would be playing the Wildcats.

“I thought ‘Oh god, what am I going to do?’” Johnson said. “Then I had four other girls come up to me and say they’re in the same predicament as me right now.”

The predicament these students are facing is nothing new. Since NKU was established in 1968, its students have come with previous loyalties to other schools when it comes to sports. But for a lot of students, there’s something about NKU that’s different.

Mark Buerger hosts Sunday Morning Sports Talk on Newsradio 630 WLAP, the Lexington-based flagship station of the Wildcats. Buerger, a 1991 graduate of NKU, said he felt the same way when he arrived on campus in the late 1980s.

“There were probably fewer NKU fans on campus when I was there than there are now,” Buerger said. “I don’t know that for most of the games we would even draw 10 students. I’m not sure how many students were particularly aware that we had a basketball team.”

Shortly after Buerger graduated in 1991, the original uprising began. The Norse began climbing the ranks in Division II, appearing in two national championship games in 1996 and 1997.

Twenty years later, a new uprising has begun. The Norse won the 2017 Horizon League championship and are appearing in the Division I NCAA tournament in their first year of eligibility.

“When I was a student there, this day was like landing on Jupiter, we would have never even imagined it’s possible,” Buerger said. “This was not even comprehendible at the time.”

Just as alums like Buerger are thrilled, so too are the recent alums who over the course of their time at NKU watched a team in the middle of a transition with nothing to play for at the end of the season.

Ryan Toler graduated from NKU in 2015, but attended every home game this season. He was excited for his alma mater.

“I started at NKU in 2012 right when they became D-I, so it was great seeing their growth over the five years of being able to watch them,” Toler said.

Like Johnson, Toler spent his time at NKU cheering for both the Norse and the Wildcats. When he saw the first round matchup, he wasn’t sure what to do.

“I really didn’t know how to react,” Toler said. “I was so conflicted. I can imagine it’s like a parent trying to pick a favorite child…they just can’t do it.”

The rivalry between Kentucky and the University of Louisville is one of the fiercest in all of sports, so naturally Toler preferred the Norse play the Cardinals instead.

“I was actually hoping for an NKU versus Louisville matchup so I could root against Louisville as well,” Toler said.

Some fans were disappointed with the matchup, hoping that the two teams they root for wouldn’t have play each other, but Buerger disagrees. As far as he is concerned, it couldn’t have worked out better for NKU.

“I feel completely differently. I feel like it’s the best thing that could have ever happened to them,” Buerger said. “This is the best situation for them to be in because, even if they lose the game, this is the best exposure they could possibly get.”

Buerger argues that if the Norse were matched up against any other major team across the country, there would be less eyes on the Norse, and those eyes are important.

“Not nearly as many eyes would be on that game, UK is the draw.” Buerger said. “Everybody that’s a UK fan will watch this game, they’re not going to turn this game off. This is as good as I think it can get for Northern.”

“I was kind of disappointed,” Rechtin said. “Obviously, I want both programs to succeed, but not at the expense of the other. I would love to see NKU make a Cinderella run, but don’t want UK to lose out in the process.”

Despite being an alum of Kentucky, Rechtin has strong ties to NKU. He attended NKU for one year before transferring to UK and graduating in the late 1990s. His wife Leighann is about to earn her third degree from NKU. For awhile, Rechtin even taught physical education classes at NKU. Rechtin will be pulling hard for the Norse, but he knows it’s a tough task.

“This is gonna hurt,” Rechtin said. “Being as objective as I can, there’s no way we can keep up with UK. They are so athletic with so many weapons who can get to the basket; it’s going to be an accomplishment to keep it close.”

Johnson still bleeds blue, but on Friday night, she’ll be rooting against the team she’s loved her whole life. However, if the Wildcats do beat NKU, she’ll be supporting them the rest of the way.

“I’m going to cheer for NKU. This is my college, this is huge for NKU and since we’re playing UK it’s even bigger,” Johnson said.

Toler is also putting his allegiance to the Wildcats aside come Friday night, he’ll be rooting for the Norse.

“I think when it comes down to it, I will be rooting for the underdog, NKU. NKU is the feel good story this year and it’s hard not to root for them,” Toler said. “Yes it will be hard to root against the team that I have been rooting for my entire life, but if anyone were to defeat UK, I would be happy to know that it was my alma mater.”

Buerger knows that it would be ridiculous if the Norse were to pull of the upset on Friday, and despite the fact that he’s a long-time UK fan and hosts a show on the Wildcats flagship station every week, he’ll be pulling for his alma mater.

“I will certainly be cheering for NKU in the game. This is such an incredible source of pride for people that have been associated with the school,” Buerger said. “This is NKU basketball on the largest stage, at the highest level. I firmly believe that NKU as an athletic department and a basketball program is on the rise.”