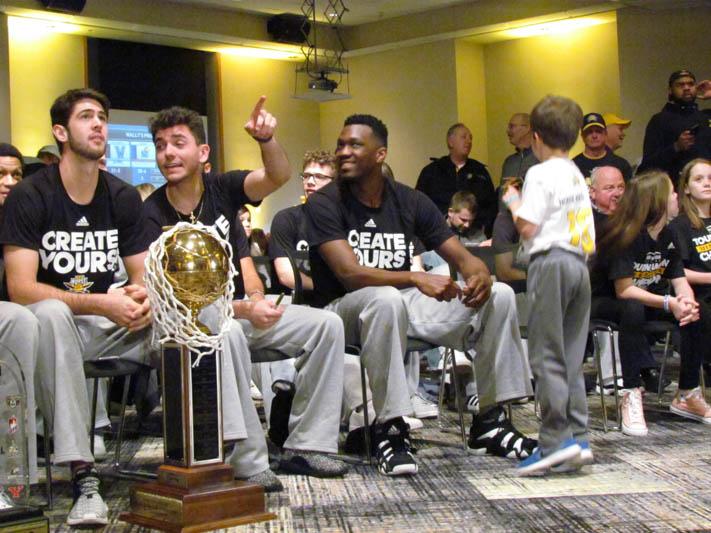 The Norse anxiously watch the selection show as they wait for their name to be called.

In the last five years a 15-seed has beaten a 2-seed four times in the NCAA Tournament. The NKU Norse will have a chance to be the fifth team to do that this year.

After winning the Horizon League tournament on Tuesday, the NKU men’s basketball team have earned the right to play the University of Kentucky in the NCAA Tournament on Friday in Indianapolis. The Norse will play in the South Regional bracket.

Kentucky is the two seed while the Norse are the 15 seed in the tournament. UK is 29-5 in the regular season and just beat Arkansas to win the SEC Championship.

When head coach John Brannen saw his team on the screen, he felt a wide range of emotions as the room erupted into cheers.

“There’s an excitement level for our young men to experience this,” Brannen said. “I’ve experienced it before and it’s a special feeling for your name to pop up on that screen. It’s like Christmas when you are a basketball player or coach.”

Brannen said he wasn’t surprised when they announced NKU’s matchup with Kentucky.

“We know the NCAA Selection Committee has a sense of humor with their selections so I wasn’t stunned,” Brannen said.

The Norse discovered their fate in the NKU Student Union Ballroom, along with hundreds of students who joined them for the NCAA Selection Show Party.

The Norse anxiously awaited their name being called in the Student Union with hundreds of students, fans, and fellow student athletes and coaches.

“It’s just another example of how great this community is,” Drew McDonald said. “Just to have 900 people here just to watch a show to reveal where we are going to play is great.  It really gives us support and confidence going into a game.”

The Midwest and East regions were announced prior to announcing the South region, so Norse fans and players alike excitedly awaited the announcement from Greg Gumbel.

“It was incredible,” McDonald said. “Your heart is just pounding and it’s a different kind of pounding from when you are playing. You know you’re in and you are trying to know your fate and to see a big time school like Kentucky is a dream come true.”

Brannen is familiar with the Wildcats from his days at Alabama, where he was an assistant coach. His mind started moving toward how to prepare his team for the upcoming matchup.

“I’m thinking matchups and about all the little things that take place,” Brannen said. “I coached in this SEC for six years so I have a pretty good feel for the teams in that league.”

“We have three guys on the team who are from Indianapolis specifically so for us three it going to be extra special to play in our home state,” Murray said. “I get one shot to play in the NCAA tournament and then to do against the Kentucky Wildcats is a big opportunity for us and it’s something I will cherish the rest of my life.”

Stay tuned to the Northerner for analysis of the upcoming matchup with Kentucky.

Brannen addressed the crowd prior to the selection show. Here is what he had to say:

Part two of John Brannen speaking to the crowd in the SU @NKUNorseMBB pic.twitter.com/DA7aBpcu8t