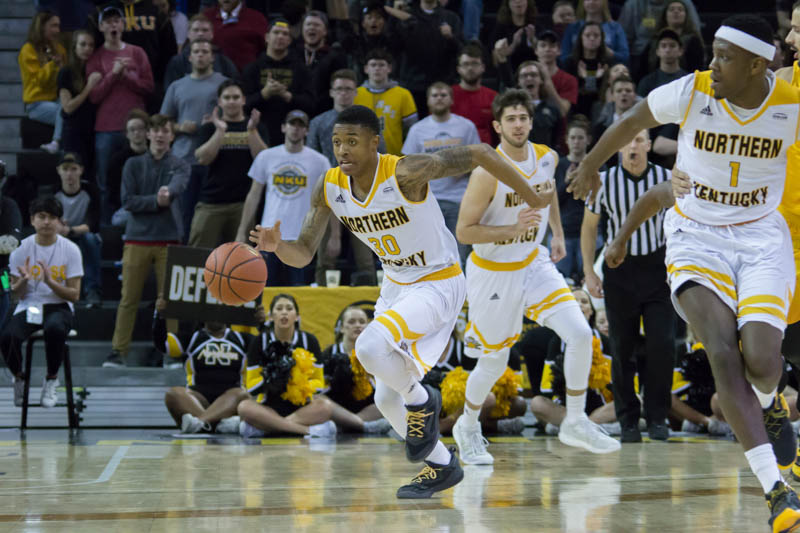 “In this environment, it’s all about March Madness,” head coach John Brannen said. “But to not recognize how difficult it is to go through an 18 game schedule where everyone knows what you are doing- for this young team to finish that 12-6 is a testament to them.

“It’s a testament to the type of young men they are, how much they care about the school, and how competitive they are.”

This was the first time the Norse have beaten Valparaiso in their time in the Horizon League, who has been a traditional powerhouse in the league.

“We stayed hot going into the tournament. It was a mentality that we needed to knock them off to build that confidence,” senior Cole Murray said. “It was special for me and I’ll remember it the rest of my life.

Valparaiso had a chance to tie the game with 35 seconds left in the game. Max Joseph took a quick three and missed, giving the ball back to NKU, who would drain six free throws to seal the victory.

The Norse only trailed once in the middle of the second half, but never lead by more than 10 points. To start the second half, the Crusaders made all five three point shots they took. They would only make two more threes the rest of the game.

“We know they weren’t a great three point shooting team so eventually we knew it would take its course. So we just had to stick to our rules and our ways,” guard Lavone Holland said.

The Norse, however, played one of the best offensive games of the season, shooting 57 percent from the field and 42 percent from three point range and were able to keep up with the Crusaders hot shooting.

“I think we are pretty potent offensive team,” Brannen said. “So for me it was really defense and getting deflections and forcing them to take contested shots.”

“We didn’t do a great job of guarding the three point line but that wasn’t a point of emphasis which was to keep them out of the paint,” Brannen said.

Tevonn Walker led all scorers with 25 points, going 4-9 from downtown. Shane Hammink scored 23 points for the Crusaders and went 4-7 from three point range.

The Norse will now look ahead to the Horizon League tournament where they will be either the three or four seed depending on how other Horizon League games play out today.

Stay tuned to the Northerner this week for a Horizon League preview.