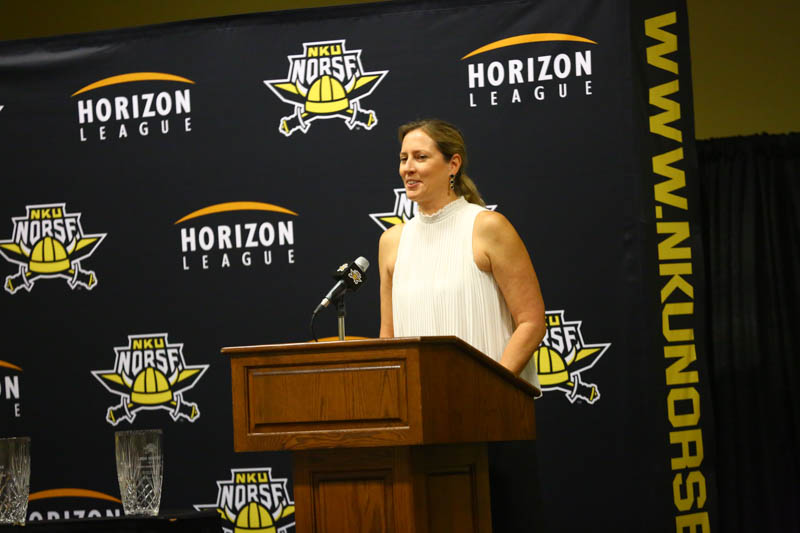 Thursday night Northern Kentucky University’s Department of Intercollegiate Athletics inducted seven individuals and one team into its Hall of Fame.

The Northerner took the opportunity to speak to some of the inductees in attendance prior to the ceremony.

John Basalyga, inducted as the head coach of the 2010 soccer team, said he was more excited for the players being inducted than he was for himself.

“This team was not the most technical team, by far,” Basalyga said. “What set this team apart was their work rate, their work ethic.”

“The way we played was just all heart. It’s the greatest feeling in the world because those kids believed in what we were doing. Two years earlier we had gotten beat in the semis and I personally was not going to let it happen again.”

Bethany Gastright Flick, NKU’s single-season kills record holder for the volleyball team, said after 16 years since her last game for the Norse she didn’t think she would get in the Hall of Fame.

“It’s pretty unbelievable. It’s been really kind of a cool thing for me because over the years a number of girls I played with have been inducted into the Hall of Fame,” Gastright said. “So to be able to be in there as well is really really exciting to me and to be honest I still can’t believe it.”

Gastright has stayed in the area and said she still tries to see a couple games a year.

“It is really amazing to see 16 years ago what NKU was,” Gastright said. “Nineteen years ago from my freshman season to now, the school’s unrecognizable.”

Linda Honigford, who holds a spot in the top 10 of four categories for the women’s basketball team, has spent most of her time since graduating teaching across the globe. She has spent the past six years in Dubai.

“I couldn’t believe it when I heard it,” Honigford said. “It’s such an honor and I owe a lot to coach Winstill for bringing me in and giving me the opportunity to play and develop as a player. That’s the only reason I’m receiving this honor tonight.”

Honigford said her greatest accomplishment as a Norse was her free throw percentage, where she ranks number 10 all-time for the women’s basketball team.

“I was never really a good free throw shooter when I was in high school,” Honigford said. “My mom would always be like ‘Why can’t you hit your free throws?’ and I ended up I think 79 percent from the line for my career.”

Andy Listerman, a member of the 1995-96 and 1996-97 teams that were national runner-up, received the news of his Hall of Fame induction from his childhood friend and now NKU men’s basketball coach John Brannen.

“John was the first one to call and said ‘You got in’ and I started laughing because I didn’t think that was possible,” Listerman said. “I didn’t think I had the stats in terms of numbers. I played with three all-Americans, five top scorers in the history of the university.”

Listerman reflected on his time playing at Regents Hall and said it felt like there was a sixth man in the stands.

“I definitely felt like we had a home court advantage because the fans sat right on top of you, they were right there,” Listerman said “If you went diving for a loose ball you would run into President Votruba or President Booth or somebody like that or Coach Shields’ family in the front row.”

Mark Marksbury, second all-time in complete games for the NKU baseball team, said he remembers his first time pitching for the Norse in an exhibition game.

“They called for an outside fastball and I threw an outside fastball, but it was about belt high and he hit a double off the right-field wall and after the inning I came in and Coach Asalon looked at me and said ‘Welcome to college,’” Marksbury said. “So the thing I learned is you had to locate the ball a little better than in high school.”

Marksbury recalled his two favorite memories playing for the Norse, but neither were of his times pitching.

“I did get to pinch-run once and I scored the winning run against Grand Valley State and then the other one was I got one at-bat my senior year and I got a base-hit so I hit 1.000,” Marksbury said. “So those are the two things that stand out because I didn’t get to do it all the time.”

Ricki Rothbauer, two-time All-American for the softball team, came in from Colorado for the induction ceremony.

Rothbauer, head softball coach for the University of Colorado-Colorado Springs, said she took her coach’s winning mindset with her to her current coaching position.

“We played for a coach who was really really driven to win and I think if you can make your kids understand that there’s one goal in all of this and it’s a very difficult game and a very monotonous game at times,” Rothbauer said. “That’s what everybody here had; we had seasons that were nearly perfect year after year after year. Everybody was chasing that.”

Rothbauer, who helped NKU set an NCAA Softball record 55-consecutive wins, said her favorite memory from playing for the Norse was getting to host the regional championship and have the teams’ families in attendance.