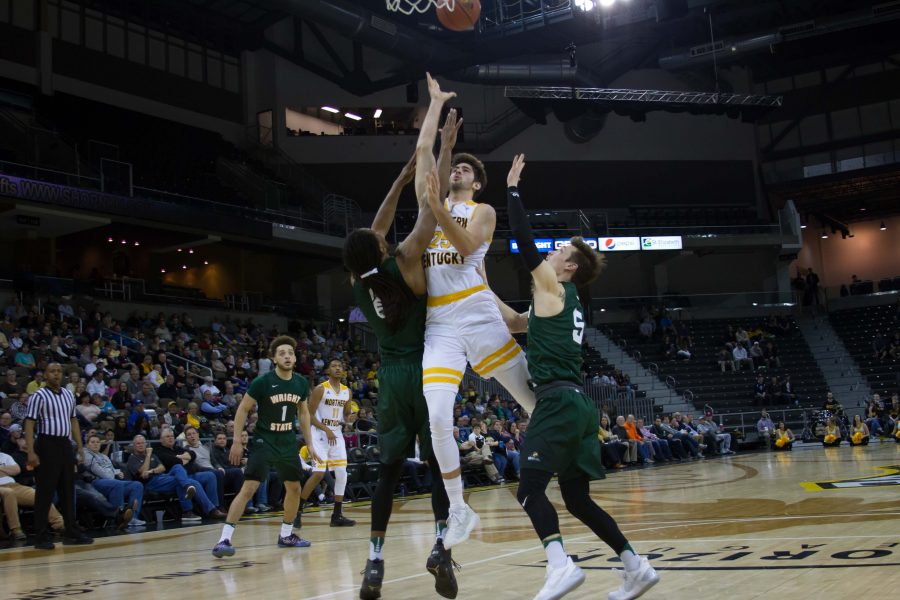 HIGHLAND HEIGHTS, Ky. —  Trailing by seven at the half, Northern Kentucky outscored Wright State 50-36 in the second half Tuesday in an 83-76 victory over the Raiders.

The win moves NKU into a tie for fourth with the Raiders, but the Norse have the tiebreaker over Wright State thanks to the season sweep.

However, things had to change from the first half for the Norse to pull out the victory.

“Coach sat us down at halftime — just us and him,” Drew McDonald said. “There was no one else in the locker room. He talked to us and challenged us, man to man. They were out-toughing us, outplaying us, going after every loose ball.

NKU head coach John Brannen knew his team wasn’t going to come back without an attitude adjustment at the half.

“(Wright State) played with a toughness and tenacity that we didn’t match in the first half,” Brannen said. “In the second half, we came and played like we’re supposed to play.

“When we do that, we can be as good as anybody in the league.”

Just like the first meeting of the season between the two teams, the game was decided in the final two minutes. When Wright State’s Grant Benzinger hit a three with 1:20 left, the game was tied at 74.

Following an NKU timeout, Lavone Holland II scored on a floater in the lane to put the Norse back on top.

Mark Alstork tied the game again at 76 with a pair of free throws with 48.6 left. It would be the last points Wright State would score.

Holland followed with a great pass to McDonald, who scored while he was fouled. The three-point play with 42.5 left gave NKU a 79-76 lead.

At the other end, Alstork drove to the basket but had his shot swatted away by Holland. Cole Murray grabbed the rebound. McDonald and Holland made all four free throws in the final 24.8 seconds to seal the win.

McDonald scored 16 points in the second half after a tough first half.

“Cole and Lavone and the rest of the team did a great job keeping us in it,” McDonald said. “We didn’t play our best half. The second half is going to get us going and get us playing our best basketball at the most important time of the year.”

For Murray, the NKU turnaround offensively started on the defensive end of the floor.

“We’re a team that when we don’t get stops on the defensive end, it affects our offense,” Murray said. “We’re going to keep riding the big fella (McDonald). When he gets going, it opens everything else up.”

After a stretch of five games in which Holland scored in double figures just once, he was strong offensively and came up with the big blocked shot.

“I know I went through a stretch of the season where I wasn’t playing as well as I could,” Holland said. “My teammates didn’t treat me any different. They didn’t put any more pressure on me. For me to do that, it’s because I’m comfortable. I know my teammates have my back regardless.”

For the third straight home contest, the Norse faithful made an impact at the end of the game. Brannen knows that needs to continue if NKU is going to build the type of home-court advantage he wants.

“It’s huge … it’s everything,” Brannen said. “For us to win a Horizon League championship, we have to have an advantage at home from the electric atmosphere. I felt like the Milwaukee game and this game, it was a big reason why we won.

“I’m urging everyone who came tonight to bring a friend Friday. It’s going to be a challenging game.”