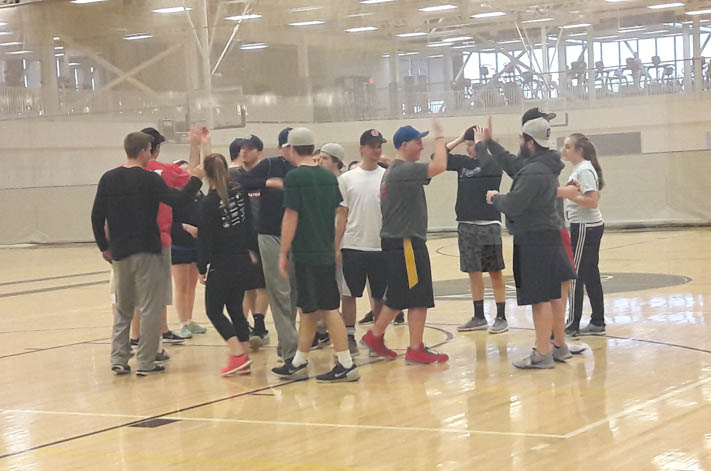 The Recreation Center basketball court was turned into a makeshift baseball field to celebrate the history of the Negro Baseball League.

Campus Recreation and African Programs and Services came together to create this event to help NKU students not only learn more about Black History Month, but also the Negro Baseball League that was established in that era.

“This event really helps with teaching not only the players, but the students on campus about how big of an impact that the Negro Baseball League had not only on life today, but major league sports in general,” said Jeremy Chipman, assistant director of recreational programs.

There were 12 Negro teams represented in the Wiffle Ball game, each player wore a hat or a t-shirt to represent one of the Negro League teams. Negro League Baseball began in the 1920’s and were active until 1950, after Jackie Robinson broke the color barrier

The players are selected by the intramural supervisors based on who they think is having the most fun, and puts the most effort into their playing during their regular season games.

“The Negro league was just a minor stepping stone for the players today being in the majors,” Chipman said. “So we try our best to publicize different information about players, and the events that went on during that time period, so that the students and spectators of the game will learn more about the league.”

Every year they rotate between different hats and shirts to showcase all of the leagues of that era, which are purchased from the Negro League Baseball Shop in St. Louis.

Many of players that were involved in the all-star game were also there representing their fraternities or sororities, along with representing a team from the Negro Baseball League.

“It is an honor to be selected for the All-Star Game just knowing what it is representing with the Negro leagues, and with having the merchandise from the leagues, it is just something to be proud of,” sophomore Bryson Caldwell said.

Caldwell, who has played baseball since he was young, was representing the Brooklyn Royal Giants for the Negro Leagues and his fraternity Tau Kappa Epsilon. This was his second year of being selected for the All-Star game.

“Wiffle Ball is just a knock-off (of) baseball, and it is just all about having fun, making friends, and memories that will last a lifetime,” Caldwell said.

This year was sophomore Allie Robertson’s first year playing in the All-Star Game. She represented her sorority, Theta Phi Alpha.

“It was really nice to be noticed, because I only just joined my sorority this year,” Robertson said. “I think that being as active as you can in the intramural sports really helps. I am really excited and honored to be playing in this game knowing what it is representing.”

“We feel it is important to share with the NKU community the history of Negro Baseball League by playing this game every year,” Chipman said.