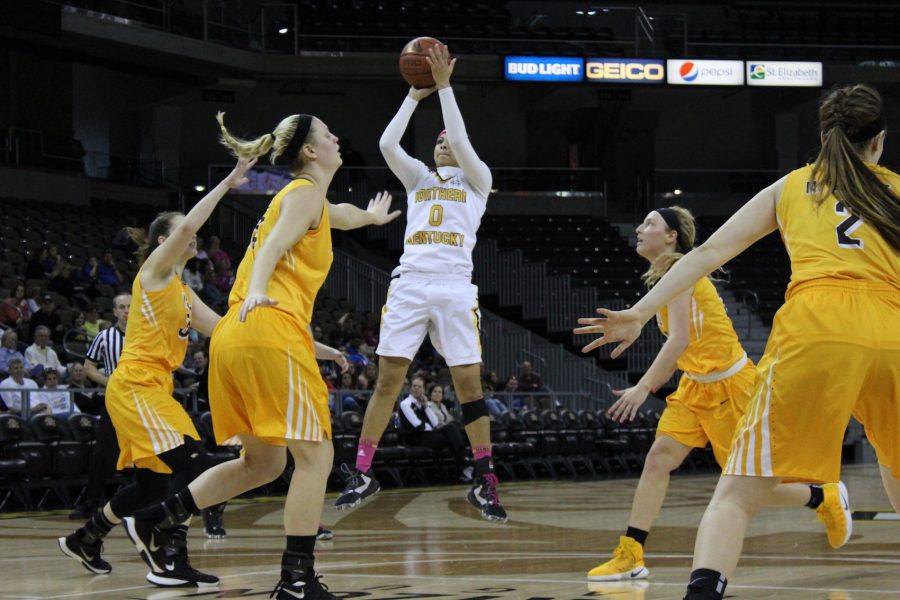 The NKU women’s basketball team lost 41-32 to Valparaiso on Saturday at BB&T Arena. The loss drops the Norse to 8-17 overall and 4-9 in Horizon League play. The loss also means the Norse split the season series with the Crusaders.

The Norse came out of the gate slow, making just 15 percent of their shots in the first quarter. The Crusaders won the rebound battle in the first period as well, grabbing 16 boards to just seven for NKU. At the end of the first, Valparaiso led by six.

“I am a little disappointed in our team,” Head coach Camryn Whitaker said. “We did not have energy today. We looked like we could be anywhere else. Typically our team doesn’t play that way. It’s something we definitely have to figure out.”

NKU’s struggles continued in the second quarter, seeing the Norse score only one point in the first seven minutes. While the offense struggled, the defense stepped up, holding Valparaiso scoreless through the first five and half minutes of the second quarter.

“It’s not our defense, we held them to 41 points,” Whitaker said. “Defense every day has been our staple and it’s going to continue to be our staple. We have to find a way to score.”

Kasey Uetrecht knocked down a three with 17 seconds remaining in the first half to bring the Norse within four. At the break, Valparaiso led NKU 18-14.

The third quarter was much of the same, but the Norse did improve their shooting to 27 percent. Valparaiso had outrebounded the Norse 39-23 through the first three quarters, and led by eight points going into the fourth.

Valparaiso began to pull away in the fourth quarter, leading by as many as 10 points. The NKU defense responded and the Norse narrowed the gap to five points with just two minutes to play, but could not hold off the Crusaders late.

Offensively, the Norse were led by Kelley Wiegman, who had 12 points. Kasey Uetrecht added six points and 13 rebounds.

The Norse travel to Youngstown State to take on the Penguins in their next matchup, a 5:15 p.m. tipoff on Thursday, Feb. 16. The game will be available to watch on ESPN3.