Building from the bottom: Riddle takes over men’s soccer 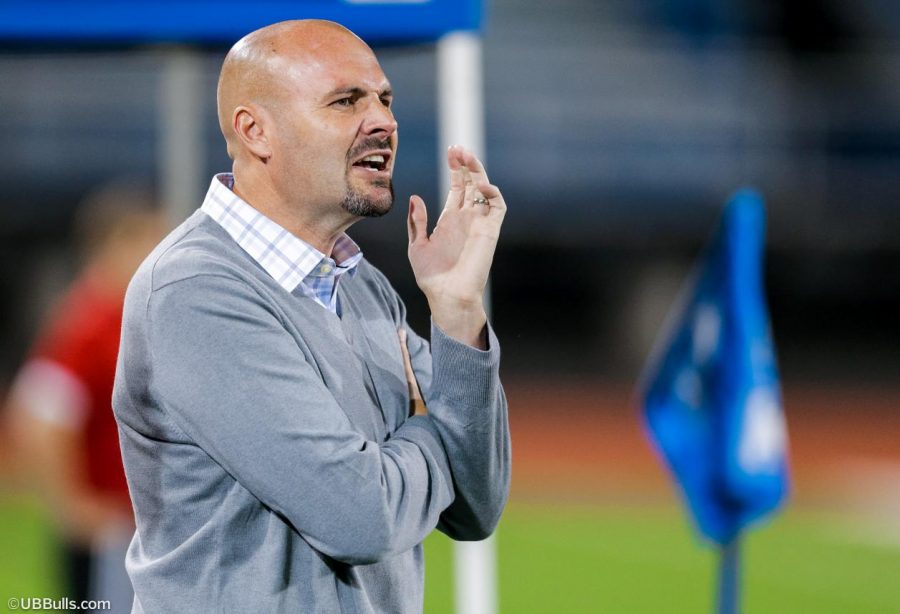 Photo Courtesy of the University of Buffalo Athletic Department

At only 19 years old, Stuart Riddle received an unexpected call.

It was from the New Zealand National Soccer Team that included an invite to national team camp. That 1996 invitation led to four appearances for the national team, including an olympic qualifying tournament.

Perhaps the most influential part of Riddle’s time with national team was having the chance to learn from manager Bobby Clark.

“He gave me a really good foundation of what a good coach does,” Riddle said. “He made me see the game in a different way.”

Twenty-one years later, Riddle received a call from Northern Kentucky University. Now he’ll be the head coach of the Norse.

Just over a month after NKU men’s soccer coach John Basalyga announced his retirement in December, NKU hired Riddle to be his replacement.

Riddle recruited and developed Russell Cicerone, who was selected in the fourth round of the 2017 MLS SuperDraft by the Portland Timbers.

Before taking over at Buffalo, Riddle was the head coach at Western Michigan University from 2009-2012, where he took the Broncos to two MAC championship games. With seven years of head coaching experience in the MAC, Riddle has been to four conference championship games and has compiled a record of 61-68-21.

Riddle’s biggest obstacle in the MAC was the University of Akron, one of the top soccer schools in the nation, and the top-ranked team in the country at the start of the 2016 season. Akron has won all but one MAC championship since 2009.

A native of Wellington, New Zealand, Riddle grew up around the game of soccer and spent his entire life playing and coaching it. In 1999, he graduated from Coastal Carolina University where he played for two years. He then played professionally throughout the early 2000s in Austria, England and Scotland.

Nowhere to go but up

As a player and coach, he’s known for being emotional.

Louis Spina, who worked along side Riddle in the athletic department at Buffalo, recalled a couple of occurrences when Riddle got excited on the sidelines.

“This year after we scored late in overtime, he ran and jumped into the pile with the team,” Spina said. “He runs up and down the sidelines and he gets really into the games.”

My favorite @BullsMensSoccer moment from the 2016 season Can’t wait to see @R_Cicerone7 in the @MLS combine tomorrow pic.twitter.com/HA3Cg5oust

These emotional moments have always been there for Riddle. He says that emotion stems from his time as a player; he was a striker and loved to score goals.

“I was addicted to that feeling of finding the back of the net, there’s nothing quite like it,” Riddle said. “I sort of draw off of that on the sideline as a coach now.”

This resonates with players, too. Spina said athletes respond well to him, and years down the line alums come back because of him.

Riddle takes over an NKU soccer program that is coming off of one of its worst years in school history; a 1-13-4 campaign that saw the Norse go winless at home and win only one Horizon League game. Going into the 2016 season, the roster was comprised of 10 freshmen and only one senior.

“If you look at the RPI rankings, NKU were 205 out of 206 last year,” Riddle said. “There’s one way to go and that’s building from the bottom up. Everyone is going to get a fair crack of the whip and have an opportunity to showcase what they can do.”

What a place to come to work everyday! Loving my first full week with on the pitch with @NKUNorseMSOC @NKUNorse ⚽️ pic.twitter.com/DAdUD5ft2f

‘You have to trust the process’

Aside from the challenges that come from taking over a new program with a plethora of young players, Riddle is also taking over for Basalyga, the winningest coach in NKU history. Basalyga spent 14 seasons as head coach of the Norse and has a career record of 161-88-38, along with leading the Norse to the 2010 NCAA Division II National Championship title.

“Enormous shoes to fill for sure,” Riddle said. “Anyone who has won a national championship at any level has obviously been doing something very well.”

Now that Riddle has gotten to campus and settled in, the focus now shifts to 2017 and beginning to build the program in his own way.

Glad to be on campus @nkuedu Great view from my new office, can’t wait to get going with @NKUNorseMSOC & @NKUNorse pic.twitter.com/B2A7MqGrZr

“I have seen college soccer at the highest level, had to prepare my team against arguably the best team over the last decade year in and year out,” Riddle said. “I’ve been through this twice before and I feel very confident that we’re going to get this turned around pretty quick.”

Riddle understands that it’s going to be an adjustment for both the players and himself. He has to adjust to a new program and getting to know an entire team, while the players have to learn what is expected of them.

“I am trying to create an environment where the players can be as successful as they want,” Riddle said. “I am very honest with the players. You have to trust the process, it’s proven. That’s the way it’s gonna be here.”

Despite all the work that lies ahead, Riddle is excited to get to know the team and begin evaluating where the NKU soccer program currently stands.

“I’m proud to be here and be given this opportunity,” Riddle said. “I didn’t leave a team that won 12 games last year for a position that is going to be a dead end. It’s going to take some time. We can be a national top 25 contender year in and year out, but you can’t wave a magic wand and it happen straightaway.”