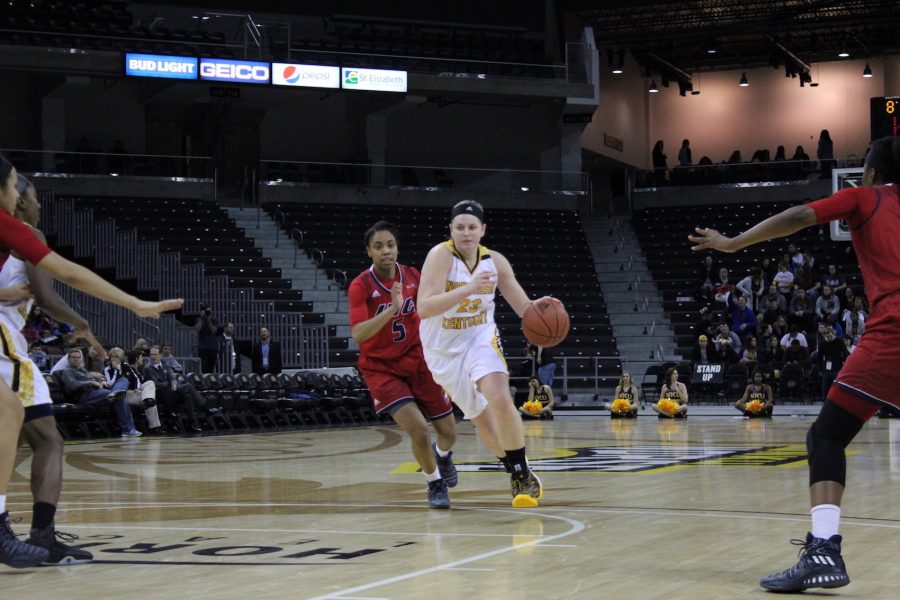 NKU's Kasey Uetrecht drives to the basket on Thursday against UIC.

The NKU women’s basketball team won 66-49 against UIC on Thursday night at BB&T Arena to snap a three game losing skid. The Norse are now 8-16 on the season and 4-8 in Horizon League play.

“I am really proud of our teams effort and obviously we’re happy for a win.” Head coach Camryn Whitaker said. “That really helps us going forward and gives us some confidence.”

UIC came into the game at 4-19 and in last place in the Horizon League. The Flames struggled to contain junior Kasey Uetrecht, who finished with 20 points, seven rebounds, and three assists.

“The drives were there, the mismatches when they would switch were definitely there,” Uetrecht said. “But really my teammates just did a great job of finding me.”

NKU’s defense locked down the Flames in the first half, holding them to just 18 points on 28 shots and forcing 11 turnovers. Whitaker stressed how important playing consistently on the defensive side of the ball has been to the team.

“One thing that has stayed consistent is, defensively we have continued to do a pretty good job.” Whitaker said. “Holding a team to 49 points, I’m proud of that effort.”

On the offensive side of the ball, the Norse shot a blistering 62 percent in the second quarter to pull away from the Flames and lead by 18 points at halftime. Along with 20 points from Uetrecht, senior Kelley Wiegman added 14 points.

The Flames came back strong in the third quarter, scoring 19 points, one more than they scored in the entire first half. Despite shooting 36 percent in the third, the Norse kept the Flames at a distance and led by 11 at the start of the fourth quarter.

“I thought they made a nice adjustment in the second half.” Whitaker said. “They took us out of our defense and what we wanted to do.”

The Norse have a quick turnaround, as they take on Valparaiso at BB&T Arena on Saturday at 1 p.m.. The game will be available to watch on ESPN3.