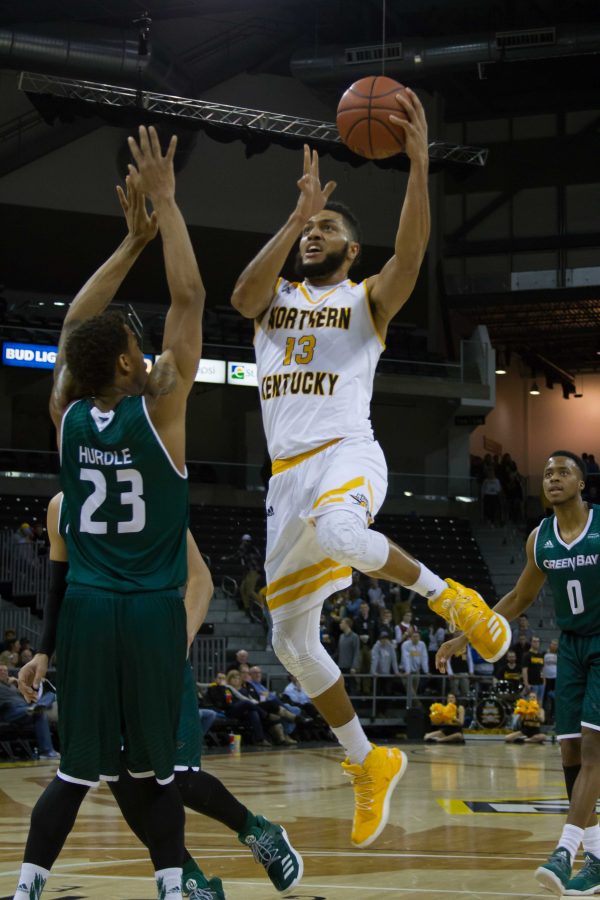 After going all season without playing a game that finished with a margin of four points or less, the Norse (16-9 overall, 7-5 in Horizon League) have now played two in a row. They defeated Wright State 83-79 Saturday.

NKU led by as many as 18 late in the first half. Just like the first meeting between the two teams, Green Bay surged in the second half.

Kerem Kanter’s layup with 4:32 left pulled the Phoenix within two, 65-63. After a Carson Williams free throw, Lavone Holland II nailed a long three to give the Norse a 69-63 led with 2:35 left.

Charles Cooper made two free throws with 1:39 left to pull Green Bay within four. Cooper then took the ball from Williams and raced down the floor for a dunk.

After another Norse turnover, Green Bay had the ball, down two, with 44.7 left. Kanter would travel with 34.6 left.

Mason Faulkner was fouled with 10 seconds remaining, but missed both free throws. NKU was 5 of 16 from the line for the game.

Turner Botz grabbed the rebound for Green Bay and the Phoenix drove down the floor. However, Khalil Small traveled with 2.1 left.

“I saw a team that shrunk the floor,” NKU head coach John Brannen said. “We played certain guys the way we were supposed to play them. We finally got them to catch the ball off the post.”

Cole Murray would inbound the ball for NKU. He threw it long for Williams, who pulled it down and ran out the final seconds for the victory.

“Cole Murray showed tremendous alertness to throw the ball deep to Carson Williams,” Brannen said. “(Williams) is probably the best person in the entire facility to throw the ball to deep. He’s probably going to go up and keep the other guy off his back.”

Brennan Gillis said it came down to toughness for the Norse.

“The last three times we played them, we weren’t tough at all,” Gillis said. “We were able to show them how tough we are.”

Murray led NKU with 17 points. He and the Norse watched a 10-point halftime lead evaporate when the two teams met in January in Wisconsin.

“Up there in Green Bay … defensively they made a charge and we didn’t slow it down at all,” Murray said. “Tonight, the same thing happened. They hit us in the mouth real quick. For us not to give up the lead was huge for our psyche.”

Drew McDonald, Jeff Garrett and Brennan Gillis each had 10.

After a slew of road games, NKU will finish the season with four of six at BB&T Arena, including Saturday’s game with Milwaukee. Murray hopes the crowd will continue to turn out as they did Thursday night.

“I can speak to my first three years here when the crowds weren’t the best,” Murray said. “It really does provide a lot of energy for us on the floor. When they go on a run, and we really need to sit down and defend and the crowd is backing us up, that really is huge for us.”

Despite the fact that Brannen’s team has won seven true road games, they are glad to be back at home.

“It’s a chance to build support in Northern Kentucky and Greater Cincinnati,” Brannen said. “This is a program that is exciting to watch.”

It is a critical stretch for the Norse. If NKU finishes at least sixth, it will avoid playing in the opening round of the Horizon League tournament. Gillis would like to see Thursday’s crowd follow them all the way to the Motor City.

“Hopefully they can come to Detroit with us,” Gillis said.