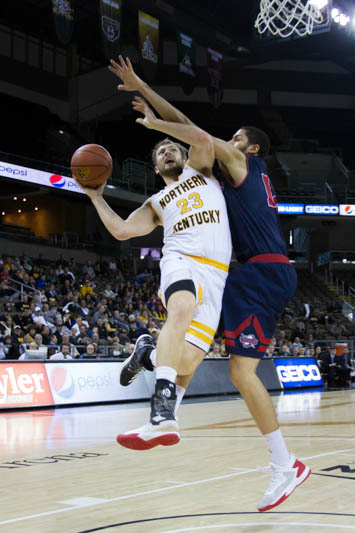 Both NKU basketball teams traveled to Dayton to face Wright State on Saturday. The men’s basketball team beat the Raiders 83-79 while the women’s team fell 67-47.

Despite Wright State shooting 50 percent on the nights, the Norse shot 49 percent and came away with the victory over the Raiders.

The game saw 14 lead changes and 10 ties, and was decided after a Jordan Garnett hit a desperation three with 28 seconds left to extend the Norse lead to five. McDonald then hit four free throws in the final 14 seconds to seal the victory for the Norse.

The Norse will play again at BB&T Arena on Thursday when they take on Green Bay, who currently sit in second place in the Horizon League. The game will be available on ESPN3.

Wright State shot 40 percent for the night, while the Norse only shot 35 percent. The Raiders also stole the ball from NKU 10 times. The Raiders had four players in double digit scoring, including Lexi Smith who scored 15 points and recorded 14 rebounds.

The Norse will play again on Thursday at 5 p.m. when they face UIC at BB&T Arena. The game will be available on ESPN3.