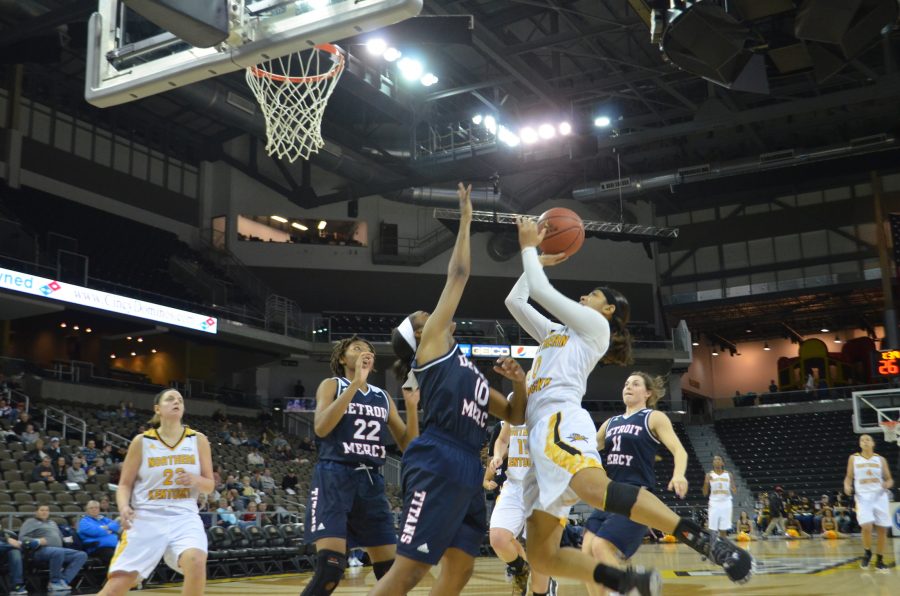 NKU's Shar'Rae Davis goes up with the ball at BB&T Arena against Detroit on Sunday.

The NKU Norse women’s basketball team lost 55-53 at BB&T Arena on Sunday after Detroit’s Rosanna Reynolds made a go-ahead layup with one second remaining. NKU’s Rebecca Lyttle missed a shot as time expired to end the game. The loss drops the Norse to 7-15 and 3-7 in Horizon League play.

The Norse were led by junior Kasey Uetrecht and Lyttle, who recorded her second straight double-double on 14 points and 11 rebounds, while Uetrecht added 16 points and four rebounds. Off the bench, senior Shar’Rae Davis contributed 10 points.

“We just held a team that averages 77 points per game to 55, so I am really proud of our defense. We had some breakdowns at the end, but it should never come down to that.” Head coach Camryn Whitaker said.

After Friday’s game against Oakland, Whitaker said she needed to find more ways to get players breaks during the game, and she did just that as Shar’Rae Davis, Laura Thomas, and Hayley Combs all contributed.

“I thought (Shar’Rae) gave us a great lift off the bench,” Whitaker said. “It wasn’t just the offense I was proud of, it was defensively, we need that and our team needs that moving forward.”

The second half was much of the same, as both teams were back and forth until the last second. NKU shot a blistering 73 percent in the third quarter, including knocking down three 3-pointers. Despite that, NKU did not lead in the game until there were seven minutes remaining in the fourth quarter. Neither team shot well in the fourth, keeping the game close.

“Rebecca was dominating inside, so that was an emphasis as a team to keep getting the ball down there.” Davis said. “Then they would collapse and would kick it out for open shots, which we started to knock down.”

With the game tied in the fourth, Detroit had the ball on an inbound with five seconds remaining. Rosanna Reynolds drove the right side of the lane, and finished with one second remaining.

Whitaker quickly called a timeout and drew up an inbound play to get Lyttle the ball in the paint. Lyttle was open but her shot fell short, and the game was over.

“It all comes down to practice, and we have to continue to play good defense, we keep doing that and we’re going to start winning games.” Uetrecht said.