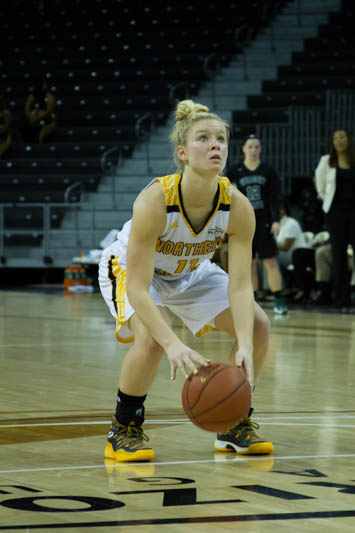 The NKU women’s basketball team won both games of a two game road trip this weekend, beating both Valparaiso and UIC. The Norse improve to 7-13 on the season and 3-5 in conference play. The Norse outscored their opponents 128-92 in the two games. It was also the first two true road wins for the Norse this season.

Mikayla Terry lead the Norse with 21 points and seven rebounds in the Norse victory over the Crusaders. Terry also recorded four steals and blocked a shot.

Three other Norse players reached double figures in scoring including Rebecca Lyttle who recorded a double-double with 19 points and 10 rebounds. Taryn Taugher reached a new career in points scored with 14 and Kelley Wiegman finished with 11 points.

The Norse outrebounded the Crusaders 36-34 as well.

The Norse defense played strong in this game, not allowing a Flames player to reach double figures in scoring. The Flames shot just 29 percent against the Norse and went just 2-13 from three point range.

Meanwhile, the Norse shot 43 percent and 38 percent from three. The Norse went 15-18 from the free throw line.

The second quarter was key for the Norse, who outscored UIC 19-9 in the quarter. The Flames then only scored five points in the final quarter to seal the victory for NKU.

Both games will be available on ESPN3.