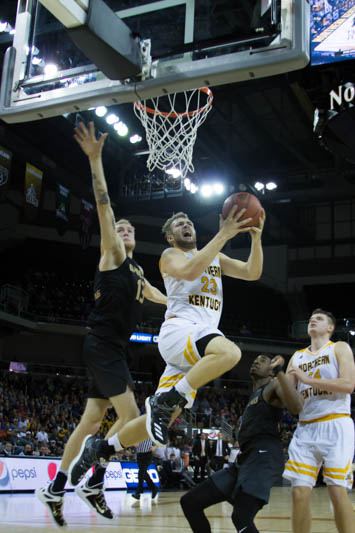 NKU fell to Oakland 79-70 Friday night in BB&T Arena. The Norse fall to 12-8 and 3-4 in Horizon League while Oakland improves to 15-5 and 5-2 in the Horizon League. This extends the Norse losing streak to three games, after dropping both road games last week.

“Three losses in a row is definitely tough,” said freshman forward Carson Williams. “We all just have to come together. We have to get back to our roots and not lose focus and what got us here.”

The Norse played in front of a crowd 4,784 people Friday, making it the toughest loss so far for Drew McDonald.

“This one hurt worse than the other two,” McDonald said. “One of our goals is to be undefeated at home and any time you let one get away on your home floor, especially when they are a top team in the league, hurts.”

Williams scored 19 points and grabbed eight rebounds in the loss, while McDonald recorded his fifth double-double in six games, scoring 11 points and 11 rebounds.

Oakland guard Sherron Dorsey-Walker led all scorers with 21 points and recorded nine rebounds, while Martez Walker followed with 17 points. Dorsey-Walker scored 17 of his points in the first half.

The Norse would come back after the media timeout though, with help from threes from Cole Murray and Brandon Maxwell and a thunderous dunk by Jordan Garnett that brought the crowd to their feet. The Norse would end the half with a 42-38 lead.

“We were more aggressive for the last 11 minutes of the half,” Brannen said. “We weren’t able to sustain it in the second half.”

The Norse would go cold in the second half, shooting just 33 percent from the field while Oakland shot 51 percent. The Grizzlies outscored the Norse 42-28 in the half.

“I think late in the half we played their style of basketball,” McDonald said. “We went to speed them up and get them uncomfortable and didn’t really accomplish that in the second half. That’s when they went on their run”

Oakland beat the Norse on the boards as well, out-rebounding NKU 40-35. This was one of four games the Norse have been out-rebounded as a team and have lost all four of those games.

Over the past three games, the Norse have 46 turnovers.

“Most of them (turnovers) are silly turnovers, just lackadaisical,” McDonald said. “That’s what got them on their run at the beginning of the game. When we take care of the ball we are a really good team offensively.”

The loss leaves the Norse searching for answers as a team on how they can get back to the way they played at the start of the season. McDonald won’t focus so much on the negatives of these losses, more so on the positives.

“We need to look at what got us leads and how we were successful in these games,” McDonald said. “We got to take the positives and move on.”

The Norse will look to break this losing streak on Sunday, when they will face Detroit-Mercy at 1 p.m.. The Titans are 2-5 in conference play so far, but have won two of their past three, including a win at Oakland.

“Detroit is a good team,” McDonald said. “We just have to go out in front of our home fans and get one. Once we get one I think we will get rolling.”

Prior to Friday’s game, Blake Spellman was released from the team due to personal matters.

“After meeting with Blake and his parents we both felt like it was in Blake’s best interest to be back home closer to family,” Brannen said. “Blake is a great young man with a bright future and we wish him and his family all the best going forward.”