Norse get dominated in the paint, fall to Wright State 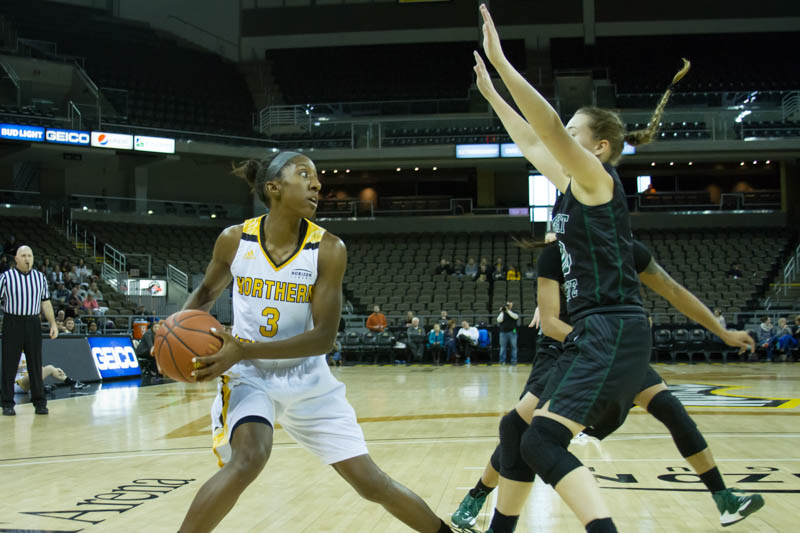 Rebecca Lyttle looks to get around a Wright State defender. The Norse lost to Wright State.

“Disappointed with the loss. I thought we had an opportunity to win the game.” Head coach Camryn Whitaker said. “I thought Wright State did a nice job, give credit to them. They stayed with it, they were tough.”

NKU struggled from the field in the first quarter, shooting just 30 percent. Fortunately for the Norse, Wright State struggled as well, shooting only 35 percent. After the first period, NKU led the Raiders 11-10.

Late in the second quarter, senior Kelley Wiegman and junior Mikayla Terry sparked the Norse, but the Wright State interior offense was too much to handle, and the Raiders led by five at the half and had outscored NKU 22-8 in the paint.

“There were stretches where we worked really well as a team, but we need to work to be more consistent for forty minutes.” Wiegman said.

Despite shooting 55 percent in the third quarter, the Norse still trailed Wright State by 12 points. The fourth quarter was much of the same, as NKU shot the ball well, but Wright State kept them at a distance.

Wright State led in every major statistical stat category including shooting percentage and rebounds. Additionally, the Raiders dominated NKU in points in the paint (46-26), and second chance points (18-7).

“Ever since June our defensive philosophy has been to keep teams out of the paint, and we just did not do a good job of that today.” Whitaker said. “It wasn’t anything special, we just got beat and we have to do a better job.”

Mikayla Terry led the Norse in scoring with 20 points going seven for nine from the field, while Chelsea Welch led the way for Wright State with 15 points.

NKU travels to Detroit on Monday Jan. 16 to take on the Titans in another Horizon League matchup. The game starts at 4:30 p.m. and will be available to watch on ESPN3.