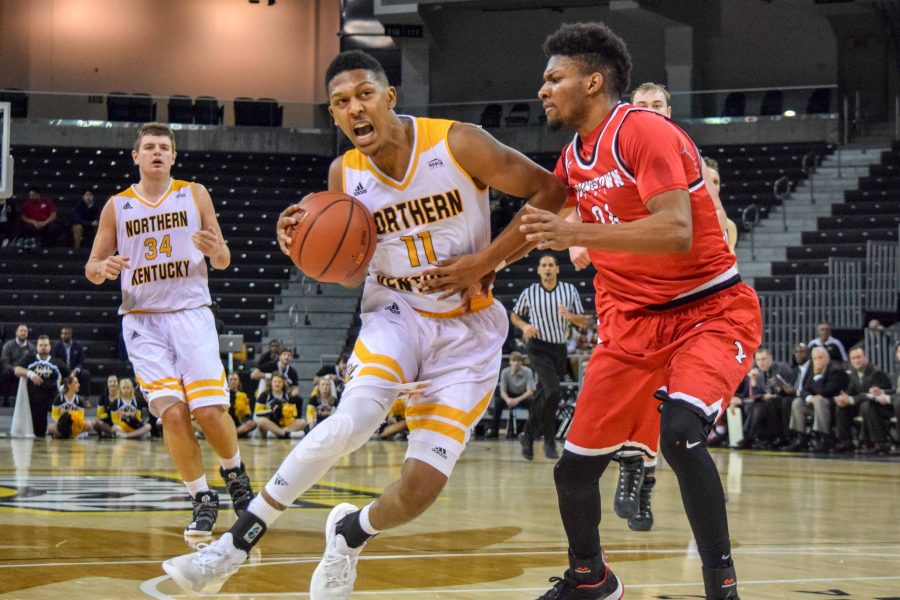 Mason Faulkner (11) drives to the basket during Thursday's win over Youngstown State.

The NKU men’s basketball team lost 80-71 to Green Bay Tuesday night. The Norse fall to 12-5 on the season and 3-2 in Horizon League play, while the Phoenix remain a perfect 4-0 in conference play.

The Norse lead 42-32 at halftime and quickly extended that advantage to 15 points before the 15 minute mark of the second half. The lead wouldn’t last long however, as Green Bay stormed back to build an eight point lead midway through the half. The Norse could never recover.

The Norse were just 9-25 shooting in the second half and were forced into nine turnovers. Meanwhile, Green Bay caught fire, shooting 62 percent from the field and 66 percent from downtown.

The Norse turned the ball over 19 times total, which Green Bay converted in 34 points. Countless more passes were deflected and fortunately landed back in Norse hands. Green Bay also blocked 10 Norse shots, including a layup from Mason Faulkner in the final minutes that would have cut the Phoenix lead to five.

Drew McDonald finished the night with 23 points and 12 rebounds for his eighth double-double of the season. Cole Murray followed with 11 points, making three out of his seven three point shots.

The Norse finish this two game road trip on Thursday, when they will face Milwaukee at 8 p.m..  Milwaukee is currently 0-3 in conference play and sit in ninth place in the Horizon League standings.