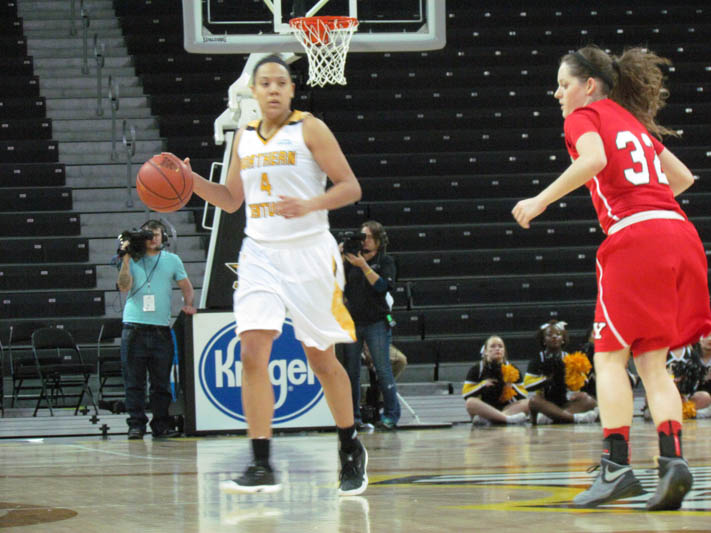 Mikayla Terry scored 16 points in the win against Youngstown State

The NKU Norse beat Youngstown State 87-81 in overtime Saturday night for their first Horizon League victory of the season. The Norse improve to 5-11 while the Penguins drop to 4-10.

“It feels good,” senior Rebecca Lyttle said. “The first three games were tough for us but it was good we all stayed positive and pushed through it.”

The Norse recovered in overtime, making 10 free throws to help seal the deal for the Norse.

“We have to learn now how to play with a lead and not let teams come back on you,”  head coach Camyrn Whitaker said. “We haven’t had many leads this year. It’s a new challenge.”

Despite the fourth quarter struggles, the Norse played arguably their best offensive game of the season against the Penguins, shooting 51 percent from the floor. The Norse outrebounded the Penguins 37-29 in the game and capitalized with 14 second chance points.

“We finally got some shots to go down,” Whitaker said. “I think that’s where we’ve been struggling with our confidence. When you hit shots you get more confident.”

The Norse were once again short on the bench with eight players dressing for the game. That bench got even shorter in the second quarter, when Laura Thomas fell hard on her left shoulder and exited the game.

Five Norse players recorded more than 35 minutes in the game. Uetrecht played all but 4 minutes while Terry only sat when she fouled out.

The minutes caught up to the Norse in that fourth quarter, Whitaker thinks. The Norse pushed the ball more in this game than they have most of the season, which tired out the Norse legs faster than normal.

“When you play that many minutes your going to get fatigued. We really looked tired,” Whitaker said. “It affects your defense and everything you do.”

Even though this is the only the fifth win for the Norse on the season and injuries are starting to pile up, the Norse aren’t ready to quit on the season yet. Each game is a learning experience for Uetrecht, who has been apart of two winning seasons with the Norse.

“How you move forward from each game is crucial,” Uetrecht said. “You could say ‘we have a losing season so what’s the point of playing?’ or you can move forward and say ‘I’m going to get better this next game and improve’ and I think we’ve done that all season.”

Whitaker is also learning everyday, through film study and in practice, and trying to find ways to improve her coaching and her team.

The Norse will play against at BB&T Arena Saturday Jan. 14 at 1 p.m. against Wright State. The game will be available on ESPN3