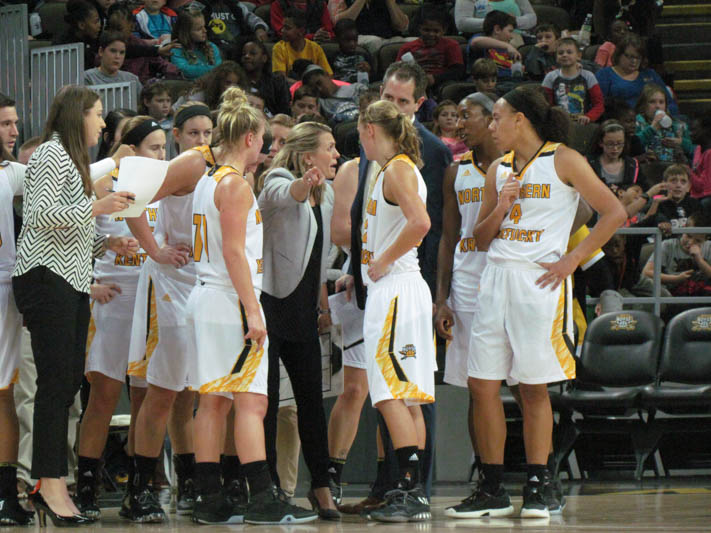 Coach Camyrn Whitaker sets up a play with seconds left in the first half. The Norse tied the game at 25 at the half, but would lose 54-45

The NKU Norse women’s basketball team defeated Arkansas State 83-78 in the second game of the Puerto Rico Classic in Las Vegas Tuesday afternoon. The Norse advance to 3-8 on the season while Arkansas State falls to 2-9.

The Norse offense was clicking in this game, shooting 54 percent from the field and accumulating their highest point total of the season. They also shot 47 percent from the three point line while making 80 percent of their free throws. Arkansas State shot 41 percent, but only shot 34 percent from three. ‘

Kasey Uetrecht led the Norse with 23 points and came up a rebound short of a double-double. She also made three of her four threes. Uetrecht was one of four Norse to score in double digits. Mikayla Terry scored 16 points while Kelly Wiegman and Rebecca Lyttle followed with 12 and 10 points respectively. Shar’Rae Davis dished out seven assists.

The Norse were down two at halftime, despite Uetrecht scoring 13 of her 23 points in the half. NKU would take control in the third quarter however, outscoring Arkansas State 26-15 in the half. The Norse would hold onto to take the victory in the fourth quarter. Terry scored 15 of her 16 points in the second half.

The Norse will play their final game of the Puerto Rico Classic tomorrow at 1 p.m. ET against Southern Miss. The Golden Eagles are 8-3 on the season. Both teams are now 1-1 in the tournament.