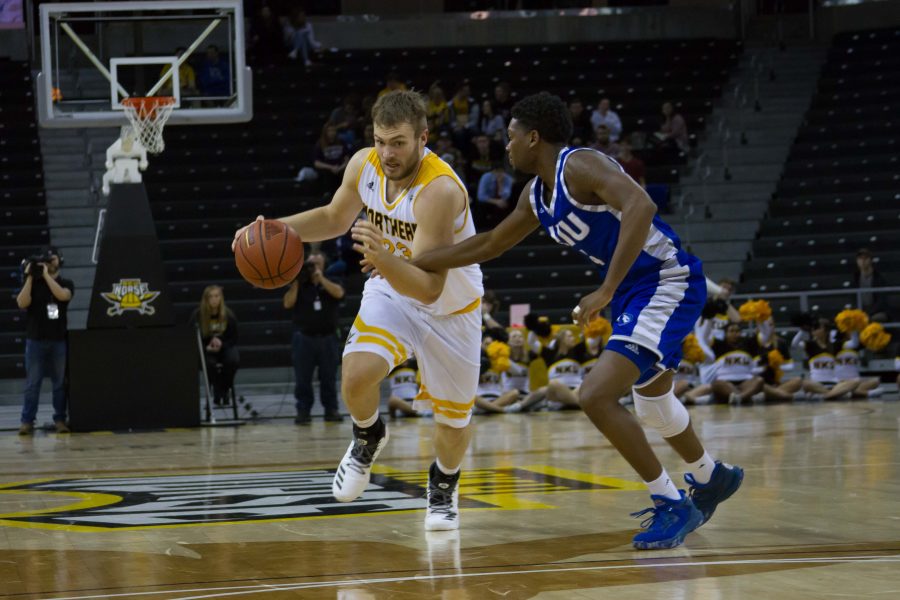 Carson Williams (23) dribbles around a defender during Wednesday's game against Eastern Illinois.

The NKU Norse beat Eastern Washington 70-48 Sunday afternoon in BB&T Arena for their fifth straight win. The Norse improve to 8-3 while the Eagles fall to 8-3 on the season.

The Norse defense smothered an Eagle offense that averages 82 points per game, holding them to 32 percent shooting for the game and just 19 percent from three. The Norse out-rebounded the Eagles 39-34 as well.

“They are elite offensively,” head coach John Brannen said. “Our young men had some extra time to game plan and they locked into the game plan as good as I’ve seen a team do.”

The three’s were falling for the Norse, shooting 42 percent from downtown. They also shot 45 percent from the field and only missed one free throw on the day.

The Norse were lead by freshman Carson Williams who was an efficient 7-12 from the field had 17 points and 9 rebounds. He also guarded and helped shut down Eastern Washington’s leading scorer Bogdan Bliznyuk, who only scored just 12 points on 4-14 shooting.

“He took on the challenge of guarding Bliznyuk and did an outstanding job,” Brannen said.

Senior Cole Murray who made five threes and scored 17 points. He dished out four assists which was tied for the team lead.

“It feels really good. I’m having a lot more fun this year,” Murray said. “I’m having a blast in my last go round with my teammates.”

After being injured much of the preseason, Murray’s give the Norse offense a boost. Murray allows the Norse to spread the floor and play inside out, which allows players like Williams to kick out when they get stuck down low.

“It makes my job a lot easier,” Williams said. “It keeps guys honest cause if you leave Cole open he’s going to make it.”

Brannen has also been impressed with how Murray has played defense. He recorded two steals in the game and blocked one shot.

“He’s improved immensely as a defender,” Brannen said. “He held number 44 (Felix Von Hofe), who is one of the best shooters I’ve seen to 9 points and 1-3 from three.”

The Norse got off to a hot start, starting the game on an 11-2 run in the first five minutes. Eastern Washington would come back however, grinding their way to a 29-24 halftime score.

“They started out in a zone and our zone offense has been really good,” Murray said. “They switched to man-to-man and we got a little stagnant.”

After allowing the Eastern Washington to take the lead for a brief time in the second half, the Norse offense got back on track shooting 50 percent from the field and outscoring the Eagles 41-24 in the half.

“We made some offensive changes in the second half to open things up and once we made those adjustments we were able to flow the way we typically do,” Brannen said.

McDonald opening up the floor for others

After double digit scoring efforts in nine out of his first 10 games, Drew McDonald has scored a combined four points in his last two games.

While this may be alarming to some, Brannen isn’t worried. While he isn’t scoring McDonald is opening up shots for others.

“As a coach I would tell you he has averaged 15 points a game,” Brannen said. “He’s getting everyone shots. His impact on the game is immeasurable. It will continue to be because of the way he plays the game and how he appreciated his teammate.”

McDonald is also rebounding well. He is averaging 7.9 rebounds per game and grabbed seven boards against the Eagles.

The Norse will play again on Wednesday against Brescia at BB&T Arena before they will embark on a three game road trip that begins with 12th ranked West Virginia in Morgantown.

“I haven’t even thought about it yet,” Brannen said. “It will be our jobs as coaches to make sure they understand how important every game is.”

The Norse will then begin Horizon League play, opening up at Detroit Mercy Dec. 19th followed by Oakland on New Years Eve.

“I think we are pretty appreciative that we have a small margin for error,” Brannen said. “We aren’t the most talented team in the league. We have to win with our preparation each and every game.”