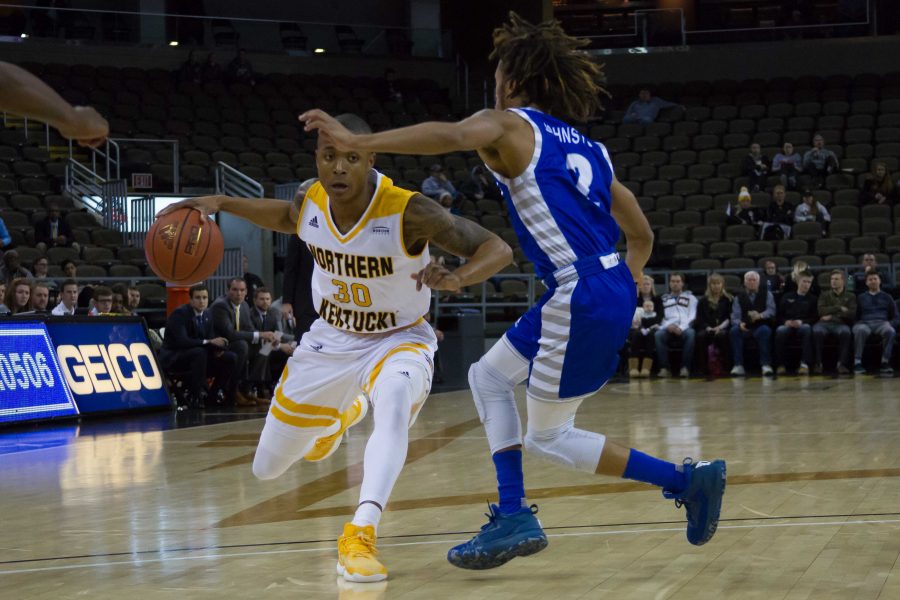 Lavone Holland II (30) had 21 points Thursday in a win over Detroit Mercy.

HIGHLAND HEIGHTS, Kentucky — For the NKU men’s basketball team, it all comes down to EMP.

Emotional, mental and physical buy-in — the three phases of the game that head coach John Brannen stresses to his team. All three were on display in the second half of Wednesday’s 80-70 victory over Eastern Illinois.

“It’s who we are defensively,” Brannen said. “If we don’t have EMP, then we can’t be successful. We have a philosophy that, defensively you need to be in the right position, you need to communicate and you need to put your EMP on.”

Brannen tells his team that they can overcome deficiencies if those three phases are consistent.

Winners of three straight, the Norse (6-3) held Eastern Illinois to just one field goal over a seven-minute stretch late in the second half.

“Our enthusiasm — our EMP as coach calls it — we just picked it up,” Lavone Holland II said. “We started off really flat.”

Brannen said his team gave the Panthers nothing easy in the second half.

“We just constantly contest,” Brannen said. “We didn’t always make the right rotations, but I feel like we’re constantly there.”

The contested shots also kept the Panthers from scoring out of their offense. EIU had a season-low 8 assists. They average 16.4 assists per game.

Even with that strong defensive stretch, the Norse lead was only two, 67-65, after Montell Goodwin found Muusa Dama for an alley-oop dunk.

Holland finished the Panthers off from there.

“My teammates were the reason I had a good game,” Holland said. “My coach always says, ‘Your teammates always deserve your best.’ That’s what I tried to do tonight.”

The Norse had just two offensive rebounds in the first half. They finished with 13 for the game.

“That’s the way we have to win because we don’t turn people over a lot right now,” Brannen said. “We have to gain possessions through offensive rebounds.”

Without Jalen Tate and Dantez Walton, Brannen had to rely on his bench to pick up the slack.

“Credit to the leaders of our team for talking our guys through it,” Brannen said. “We had our starting 2 out and our first guy off the bench out. What we said at halftime is the team with the greater will, will win the second half.

“Carson Williams really took that to heart. He was outstanding in the second half.”

After scoring just 3 points and having no rebounds at halftime, Williams finished with 10 points and 9 rebounds. He also talked about the importance of EMP to the way the Norse finished the game.

“We can do all the preparation, have as much talent,” Williams said. “If we don’t have EMP, none of that means anything.”

Drew McDonald added 17 points for the Norse. In addition, Brannen credited other players who stepped up in the absence of Tate and Walton.

“A kid like Mason Faulkner has played very little until the last two games,” Brannen said. “He’s going to be an outstanding player. Cole Murray was asked to play on the perimeter for 18 minutes tonight. He played the 2 spot. He’s never played the 2 spot in his career. Doing that in a matter of two days speaks volumes to his commitment level.

“What Brandon Maxwell is bringing us from a defensive standpoint. A guy like Brennan Gillis who doesn’t play a lot of minutes right now, but man does he make us better every day.”