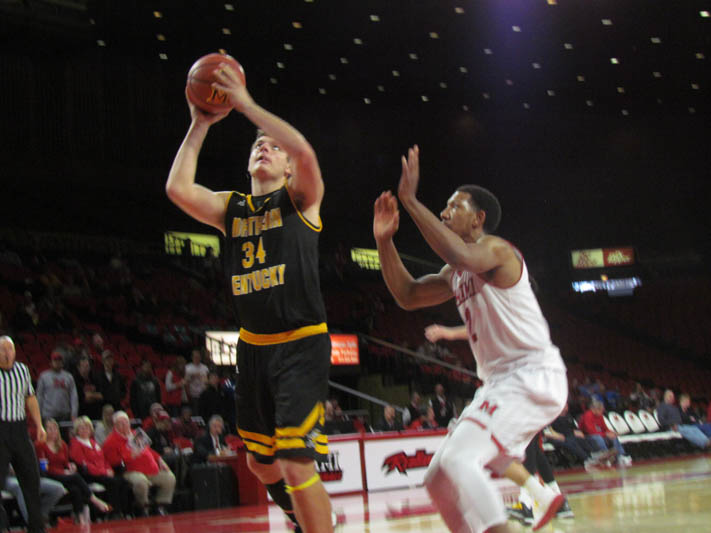 OXFORD, Ohio — The NKU Norse finished the Tarkett Sports Classic with a 79-70 win against the Miami Redhawks Sunday afternoon. The Norse improve to 3-2 while the Redhawks fall to 2-3 on the season.

“It showed their character,” head coach John Brannen said. “I’m really proud of the way our team came out after a slow start.”

This was the third game in as many days for both teams and it showed after the first five minutes, when Miami held NKU scoreless and led 6-0.

That timeout was a key moment, according to Drew McDonald, as Brannen challenged his team to be better.

“He asked us if we were ready to be NKU,” McDonald said. “That’s really all it took.”

After that timeout, junior guard Lavone Holland II hit a basket, followed by a steal and dunk, that got the Norse rolling in the game. The Norse led 34-28 at the half.

“He was the player of the game by far,” McDonald said. “He led is in huddles and in timeouts. He brought the energy. He single-handedly put us on his back and carried us.”

“I come out and play for my teammates because I know how hard they work every day,” Holland II said. “I wanted to focus in on defense cause I feel defense gets the rest of my game going.”

Holland was named to the all-tournament team along with McDonald, who had 23 points and was one rebound shy of a double-double.

“Honestly it’s a great achievement,” Holland said. “But at the end of the day, we didn’t come out here for me to win all-tournament team, but to get better for March.”

McDonald has picked up right where he left off from last season, averaging 18 points per game and 8 rebounds per game. The sophomore center contributed four assists in Sunday’s win, increasing his season total to 10.

“Watching film we knew they were going to double the post,” McDonald said. “So every time I caught the ball down there I was looking for my teammates. I can’t win a game by myself.”

Cole Murray contributed 11 points off the bench for the Norse including a 3 for 3 stretch in a two-minute span early in the second half.

“It’s great to have him come off the bench,” Brannen said. “He hasn’t practiced in five weeks. He’s just starting to get in a rhythm. He’s not fully healthy yet but once he is he will continue to add to this program.”

Miami’s Michael Weathers had 31 points for the Redhawks, but did most of his damage at the free throw line, where he went 10-12. The Norse defense forced him into five turnovers.

“Coach calls those players alpha-dogs,” Holland II said. “We let him score 31 which is a little upsetting but not as upsetting in a win.”

Free throws by Holland II and McDonald late sealed the victory for the Norse.

This was a grueling weekend for the Norse, but a weekend that Brannen hopes will prepare them for the Horizon League tournament down the line.

“It puts you in a tournament format. March 3-7 we will have to do this to win a championship,” Brannen said. “I was glad we were able to get this in early in the season.”

The Norse will take the court again 7 p.m. Saturday against North Carolina Central at BB&T Arena. The week leading up to the game will be used to make sure players are recovered from this tournament.

“Drew has a bruise the size of two softballs on his leg right now,” Brannen said. “We’ll take the next few days to recover.”